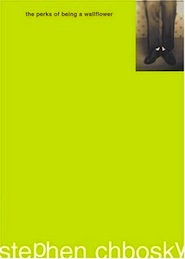 It’s Saturday. Maybe you’re in the middle of laundry. You flip on the TV and there is a movie you never had any intention of paying money to see. A scene catches your attention. Then you’re mindlessly watching the pictures move. Maybe you chuckle. Snort sarcastically. Maybe you scream at the TV about how this is all a bunch of bullshit. But you’re watching. You’re paying more attention to that than whether the clean underwear in the pile next to you is right-side out. It doesn’t mean the movie is good. It doesn’t mean you’re going to write a love letter to the director. You just got sucked into a leisure vortex for 90-ish minutes that you might forget ever happened.

Hello, The Perks of Being a Wallflower by Stephen Chbosky. This young adult novel is that movie. (Not to be mistaken for the actual movie being made from this book. I saw a trailer for it during the MTV Movie Awards and thought how in a post Harry Potter world I might finally be interested in what Emma Watson is up to. That led me to this book. But for the purposes of this review, the movie is a metaphor).

When the story opens, Charlie is nervy about his first day of high school. His friend Michael has just committed suicide. His favorite Aunt Helen has died. His brother has just gone off to Penn State to play football. His older sister is heading into her senior year. Charlie is penning letters to an anonymous friend, sort of diary entries that will drive the narrative.

Charlie, who makes a conscious effort to participate in high school, becomes friends with the most beautiful girl in the world, Sam, and her gay stepbrother Patrick during a high school football game and is absorbed into their circle. They drive him around, feed him cigarettes, introduce him to “Rocky Horror Picture Show” and the stuff that happens at parties with the teenaged alt kids in the 1990s. Charlie’s got it bad for Sam and makes no secret of it. She tells him, kindly, to squash it.

At the same time there is a high school English teacher who has taken a special interest in Charlie. He gives him extra assignments to read The Catcher in the Rye, The Fountainhead, Hamlet, and Charlie responds eagerly — eating up each new pick, each book becoming his new insta-favorite, and then writing a report on what he has read.

Recently Jodi wrote about the “Holden Caufieldization of young adult literature” and that was stuck in my head the entire time I was reading this book. The Perks of Being a Wallflower is the classic case of this.

“Why does the protagonist always have to be a friendless misfit?” she asked, recently panning another young adult novel. “A lot of times the main character is friendless because they like vintage music … reading, books and generally being a little sardonic when it comes to people in their age group.” Charlie. Are your ears burning? I actually laughed aloud when I read this sentence in “Wallflower”: “Patrick actually used to be popular before Sam bought him some good music.”

This book, published by MTV, is a super fun pop culture time capsule of the 1990s. Charlie references the final episode of MASH and makes a mixtape that includes “Asleep” by the Smiths twice, Smashing Pumpkin,s and a pre-Phil Collins Genesis. He has an enviable reading list that includes The Great Gatsby and This Side of Paradise.

Objectively I have to say this book is derivative and the climax seems to have been forced onto poor Charlie just to give him a way to change or grow. It didn’t seem organic. It was more like “Something has to happen!”

This is the mindless movie you watch on a Saturday.

Still, look. I’m not going to pretend I didn’t gobble this book up. I was a teenager in the 1990s. Charlie and I would have had enough similar pop culture interests for me to find him an intriguing character, but the world is bigger and his access to things was more far-reaching than mine so I would have learned a lot, too, as he served as a cultural curator.