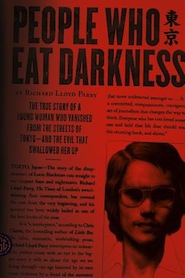 True crime almost always fails. A ripped-from-the-headlines moment hastily chucked together and packaged with the face of a pretty dead girl on the cover. A 20-page insert of glossy black and white photos: A tottering baby, a family on vacation, a killer’s graduation picture. The text is a breezy and romantic rewrite that polishes the victim’s halo, encourages outrage at the bad guy, and is bogged down with procedural farkle narkle. DNA this, DNA that. And it’s all kind of like that time when I wasn’t allowed to see the movie “Space Balls,” so I read Space Balls, the book based on the movie.

Not so, in the case of journalist Richard Lloyd Parry’s thorough and gripping account of a young British girl who went missing in Tokyo in the spring of 2000. People Who Eat Darkness. This thing is just wicked good and hard to put down, non-stop awesome with none of those patches of brown grass.

Lucie Blackman was twenty-one when she quit her job as a flight attendant and followed her best friend Louise to Tokyo. She needed to make quick cash stat to cover the debt she had accrued in her short life. They settled into a semi-seedy sector and became hostesses at a neighborhood bar. The gig included giggling with Japanese businessmen, complimenting tie selection, and encouraging the men to drink up. Hostesses receive a sort of commission for cultivating regulars and goading spending sprees. They were encouraged to spend time outside of the bar with the men to ensure their return to the club. For the most part, these relationships have historically worked and are categorized significantly higher than stripping and prostitution on the purity scale.

Lucie heads off for a non-campus meet-up on a Saturday. She’s got a lunch date with a rich dude who has promised to give her a cell phone. Later she has plans with Louise to rip it up at the local bars. She was in contact with Louise twice throughout the day — as was her style — but never returned that night — as was not her style. It takes Louise about fifteen seconds to realize something is amiss and a day later she gets a phone call from a strange man who tells her she will never see Lucie again, that the pretty blonde has joined a religious cult. Goodbye.

The response from home is split. Lucie’s family is divided by a hate-filled divorce years earlier. Her mom responds by seeking meaning in dreams and consulting with mediums; Her father cancels life and sets up shop in Tokyo with Lucie’s sister, Sophie. They call press conferences and pound the pavement passing out photographs of Lucie. They dog the local police, unaccustomed to handling crime-crime.

Parry provides super thorough character sketches of the principals, including Lucie and her insecurities and her controversial father who doesn’t mourn in a familiar way. He also presents a bumbling investigation and a portrait of the man who is eventually revealed as the killer — a big-money, friendless man whose own religious sexcapade chronicles reveal a hobby of drugging girls unconscious, donning a mask, and raping them on camera.

This story, which I’d not heard of before encountering this book, is pretty chilling. And although it happens all the time, it’s terrifying to imagine a huge planet and a missing girl as a tiny speck of a speck somewhere on its surface.