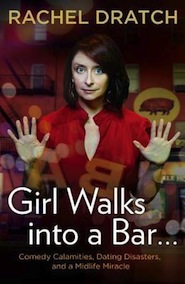 One of my all-time favorite Saturday Night Live moments is a Debbie Downer sketch where Rachel Dratch biffs a line and the rest of the people in the sketch — Amy Poehler, Lindsay Lohan, Horatio Sanz, and Jimmy Fallon — lose their shit. At one point Horatio Sanz is laughing so hard he has to wipe the tears from his eyes using his sleeve. It is hilarious and never ceases to make me laugh until I can hardly breathe.

After seeing that episode, I always admired Dratch. I like the way she tried to pull it together and even as all those fell apart around her. It takes some kind of bravery to solider on in the face of that, especially on live TV.

Brave is a fitting description for Dratch because there are parts of her memoir Girl Walks into a Bar . . .: Comedy Calamities, Dating Disasters, and a Midlife Miracle that are incredibly brave. There are other parts that are kind of drag, but let’s start with the good.

Dratch is in an industry where a woman’s appearance is everything. Hell, it’s that way for men too, but men get away with more than women. You can be an unattractive lump of a man and still get a sitcom on TV (see: Jerry Seinfeld, Ray Romano, Kevin James, and any of those other doofy-dude with a hot wife shows), but a woman has to be hot. If you’re not hot, you’re nothing.

Poor, poor Dratch has had to live with being not hot in the way Hollywood has deemed hot and she addresses how this affects her career. She talks about how she’s always offered the role of old, fat, lesbians, which says a lot about how Hollywood views women who don’t want to sleep with men. Fuck Hollywood, man.

It’s hard to judge Dratch’s memoir, because while she does spend some time talking about her looks and the way her career dried up, it wasn’t as much as I wanted. I really wanted her to get her rage on. I wanted bitter, angry feminist polemic on how much the beauty myth hurts women and her specifically.

But what I wanted was not the book she wrote, should she be judged harshly for that? Probably not. But what could have been a powerful book about loving yourself and accepting who you are and how hard it is to deal with being called ugly in a professional setting instead falls into an I dated weirdoes and then when I least expected it something kind of magical happened.

This is all well and good. Even though Dratch’s writing is clunky and awkward at times, she’s pretty damn funny and I laughed out loud at more than a few passages in the book. However, I’m not sure the world needs another memoir about dating weirdoes and looking for Mr. Right. That’s boring.

Thankfully, Dratch’s Mister isn’t so much Mr. Right as Mr. There at the Exact Right Time. Somehow, while casually dating a man who lives on the other side of the country, forty-four-year-old Dratch finds herself pregnant. Dratch talking about her unexpected pregnancy is hilarious and her honesty about how unsure she is about the baby’s father is endearing.

All said and done this memoir isn’t too shabby. It’s a nice light read, and it makes me hope and pray that someday soon Amy Poehler will write a memoir.