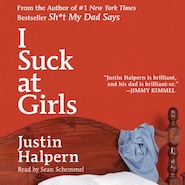 I really loved Justin Halpern’s first memoir Shit My Dad Says, a collection of stories about Halpern growing up with a smartass, cranky, loving father. I was hoping to have the same love for his second memoir, I Suck at Girls, but it turns out the most interesting thing about Halpern is his dad.

The Shit My Dad Says Twitter feed is what started Justin Halpern’s career. He had to move back in with his parents and he started a Twitter feed showcasing the shit his dad said, which was hilarious. It eventually turned into a television show and a memoir chronicling his life growing up with his dad.

The television show sucked. I watched about ten minutes of the first episode and turned the channel. I don’t think it was so much for the writing, but the casting was awful. William Shatner was cast as the crabby dad, but William Shatner can’t pull off crabby. It was embarrassing. The dad needed to be portrayed by someone like the late Peter Boyle. He was such a cranky old man on “Everybody Loves Raymond” and that’s the picture I have in my head for the crankiness that is Justin Halpern’s dad.

Even though the television show sucked, I still fell in love with Halpern’s dad in his last memoir, and since this all started with him, I was expecting more of him in I Suck at Girls, even though the title didn’t mention the dad at all. I should’ve known it was more about Halpern and his relationships and breakups, but I was still hoping for more with his father.

In I Suck at Girls, Halpern brings us through all the trouble he’s had with women his whole life, starting when he was young. There are some cute stories of Halpern doing and thinking crazy things about girls and boys when he’s little, like the time he freaked out when a friend told him that when he’s married his wife will see his penis. His older brother tells him a story about how on his wedding night he’ll take off his pants and underwear first, before his shirt and jacket, and poor little Justin does not like the idea of being half naked and letting his wife look at him. This story is cute, but the best part of it is how his dad talks to him about it, telling him, “I’m going to make you a promise. On your wedding night, you are not going to be able to wait until your wife sees your penis. Half tuxedo on, no tuxedo on, socks, shoes, you won’t fucking care.”

I cling to these little talks Halpern has with his dad because they are the best thing in the book. Yes, some of the stories are cute, but overall I just wanted more of his dad. I think it’s because I’ve read a similar memoir in the past and it was done better. Paul Feig, the genius behind “Freaks and Geeks” (I’m still mad it was canceled) and other great things, wrote a memoir about his trouble with girls called Superstud: Or How I Became a 24-Year-Old Virgin. It starts when he is young, just like this, but it had me laughing and cringing at the same time. Here Halpern doesn’t quite pull that off and I couldn’t help but compare it to Feig’s funny memoir.

I know Halpern has to move past his dad in order to keep writing, but I Suck at Girls wasn’t quite enough for me. I think he has it in him to move forward, and while this wasn’t bad, it certainly wasn’t as good as Shit My Dad Says.