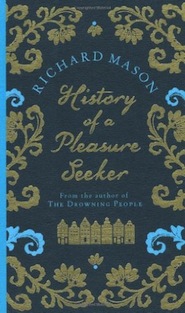 The protagonist of Richard Mason’s History of a Pleasure Seeker, he’s handsome, charming, and, above all, cunning. He’s not at all afraid to use his wiles to lift himself up out of his position as the son of a lowly university clerk and into a socioeconomic rank he sees fitting for someone obviously so blessed by nature. The first rung of that ladder presents itself as his new position as the tutor of the troubled son of a wealthy hotel magnate — or more aptly, as the wealthy hotel magnate’s lonely wife.

Set in Amsterdam in 1907, History of a Pleasure Seeker has a lot of trappings; social maneuverings and class conflict, elegant apparel and belle époque detail, but at its heart, it’s mostly about the simmering attraction between the neglected, morally conflicted wife, the handsome social climber and the slow, consistent pressure building behind their inevitable liaison.

At times, it seems to stray from that central friction in the interest of classing itself up, but the novel remains essentially a steamy romance clad in a fancy costume. A literary theorist might make something of the fact that Piet Barol does not get his comeuppance like female social climbers in literature, like Vanity Fair’s Becky Thatcher, but beyond that, there isn’t anything more sustaining to this novel.