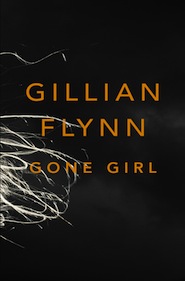 Among the skills Flynn unleashes on the world with this novel is the ability to cliff hang better than an LOL Cat. Not in that hokey, contrived way where you can actually hear the ominous “duh duh dun” and someone breaks the fourth wall to raise a single eyebrow. Her chapter endings are a careful touch. They almost feel on accident. You’ll shake your head, chuckle and mumble “Why you old dirty dog” and then start slicing and dicing at your morning routine to find ways to compensate for the late nights.

The story opens with Nick Dunne considering the size and shape of his wife Amy’s head. He grudgingly gets out of bed, wanders into the kitchen and she turns to him beaming: She’s made crepes to celebrate their fifth anniversary. A scene later he gets a phone call at work. Something is amiss at Chez Dunne. The front door is wide open and the cat is on the porch. He goes home and finds Amy is MIA and there are signs of a struggle. An upturned ottoman, a broken coffee table.

As anyone who has ever read true crime or watched a “Lifetime Original Movie” knows, these situations tend to end with the husband being sent up the river. Nick, a good-looking former pop culture writer who gets canned because now there is the internet, has a hard time deflating suspicion. His face naturally bends to a creepy grin. He keeps referring to Amy in the past tense. And he’s got a bunch of secrets about the state of their rotting marriage, the kind of secrets that don’t stay secret long when a pretty blonde goes missing.

Amy’s side of the he said-she said is revealed in alternating chapters through diary entries that start when the two met while living in New York City. She uses a lot of exclamation points during this period, she coos and pets, and her version of the couple isn’t syncing up with where they seem to be now. Or, at least, where they seemed to be on the morning of the incident.

Amy is hyper-educated  and also a writer, the only child of a long happily married couple who have used a sanitized version of her as the main character in a series of books called Amazing Amy. She also loses her job (again with the dang internet) — though she has a trust fund — and the two end up returning to Nick’s hometown in Missouri to care for his sick mom. It’s not like they had anything else going on. Amy, born and raised in New York, was reluctant to make this move. Nick adapts quickly, using the aforementioned trust fund — with permission — to open a bar with his sister Margo.

Flynn’s principal characters are monsters, both in their own special ways. Nick is self-centered and a huge fan of the path of least resistance; Amy is a condescending nightmare full of generalizations about people from the Midwest and not at all remorseful about her desire to always win and make people envy her. As soon as Flynn builds your sympathy for one, she rips at the marionette strings and makes you feel for the other one. Then you hate them both. Then you love how much you hate them, which means you’ve developed an affinity for them. Repeat.

Except this: Gone Girl is great. And not in a “Yeah, it’s great, it’s great,” distracted, looking over your shoulder at who else is walking in the front door “It’s great.” It’s really, really, really great. It’s that successful summer blockbuster that turns out even better than the trailer hinted. If it isn’t the best book from 2012, it’s definitely the one that will stay with me the longest.

A few times I closed my eyes and crossed my fingers and hoped Flynn wouldn’t break it. That the next chapter would be as fun as the one before it. It always was. Forgive me for not trusting her. It’s just that I don’t remember a lick about the other book by her that I read, not even what it was called.

This one is the homer. It’s funny. It speaks to everything from relationships to the importance of a good public relations squad in times of public tribulations to apocalypse created by the internet. But mostly it’s clever, so clever.