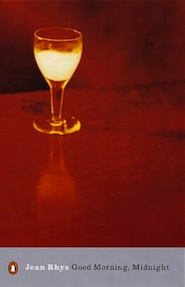 Jennifer Egan included the novel Good Morning, Midnight by Jean Rhys as part of a swag bag during the PEN Festival in April. She was asked to curate a book bag for guests staying at a certain hotel and selected 12, including this one. This is like the coolest idea ever, especially since it was Egan — who could have added a bag of Spit-Dipped Apricots to the bag and I would have added it to my Amazon Wish List.

I like knowing what Jennifer Egan wants people to read and even just a short few sentences on why. (She calls this one “tough, bleak and deeply atmospheric”). I wish authors were always posting 12 books for people to read and I wish they re-evaluated that list every couple of years. What are Don DeLillo’s 12 books? And Haruki Murakami. Someone get me Joan Didion.

I might have to come up with my own.

As for Good Morning, Midnight, the story centers on Sasha Jansen. If only she had a different hair color, a new hat, things would change for the superstitious, unlucky, and aging wanderer. A different hotel room. The cafe across the street rather than this one, where the proprietor knows her as a woman who cries after a certain amount of sips.

Sasha has returned to Paris in this stream of consciousness novel. A friend in London has tugged her up from the gutter, dusted her off, given her some money and sent her off to fix herself. But Paris is dangerous for her. It’s filled with places that triggers from when she lived there five years earlier and went through a wild ride with her new husband. He eventually left her broke and pregnant. The baby died. She overstayed her welcome at the neighborhood bars. Her decision making skills were muddied with drink and she built a reputation for herself as a cryer.

Now, back in Paris she’s got a room at a hotel. She shares a floor with a man who’s always running around in a nightshirt and giving her looks. She takes sleeping pills to sleep and drinks throughout the day. Sometimes she meets men to talk to her at night, but they’re seemingly always looking for a little more and less than she has to give them. Sometimes she makes plans to meet them again and doesn’t show up. And on and on and on it goes.

Though I hadn’t heard of this book until recently, I know I’ve read pieces of this before — maybe in collections of quotes?

“Today I must be very careful. Today I have left my armour at home.”

When this novel was written in the late 1930s, this hadn’t really been done: Sad, sad drunk wandering around Paris and wondering why she never just flung herself into the Seine. It was, apparently, dismissed as too depressing and was only reconsidered years later when it was picked up to be produced as a radio program and it turned out that Rhys wasn’t dead — she was just living some place, constantly hammered out of her gourd. And she had more words to share with the world!

Anyway, now this story happens all the time. I read a version of it earlier this year called Green Girl. It is pretty grim with no sign of things picking up for Sasha — at least no more than when her friend initiated the failed intervention.

Still, there are touches of wry humor that remain despite her desperate circumstances.

“My life, which seems so simple and monotonous, is really a complicated affair of cafes where they like me and cafes where they don’t, streets that are friendly, streets that aren’t, rooms where I might be happy, rooms where I never shall be, looking-glasses I look nice in, looking-glasses I don’t, dresses that will be lucky, dresses that won’t and so on.”