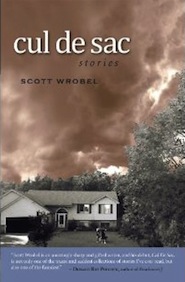 Scott Wrobel is the author of the short story collection Cul De Sac, and according to the bio section of his website he started writing by imitating Rush lyrics, which is hilarious.

If you like hilarious, you’ll probably get plenty of it when Wrobel reads along with John Jodzio and Eric Vrooman at The Loft on June 15 at 7 p.m.. In the meantime you can content yourself by reading his answers to the 6 questions we always ask.

What book(s) are you currently reading?
Headcase, a nonfiction account of a quest to figure out how the brain works, by Dennis Cass; and Jimmy Lagowski Saves the World, a collection of stories by Pat Pujolas. Both are funny and dead-serious, which is what I like best.

Have you ever had a crush on a fictional character? Who?
Maggie from the TV show “Northern Exposure.” The closest crush on a “literary” character would either be Tess from Tess of the d’Urbervilles or Han Solo from Han Solo at Stars’ End by Brian Daley. I’m serious.

If your favorite author came to Minnesota, who would it be and what bar would you take him/her to?
Charles Bowden. He’s a terrific nonfiction writer from Arizona (Blood Orchid, Desierto: Memories of the Future, etc.) and is one of my favorite living authors. He was also a good friend of Edward Abbey, my favorite writer, who is currently deceased. So, I would supply one of my favorite living writers with endless single malt scotch in exchange for tales about my favorite dead writer. It’s a selfish ploy. Instead of a bar, we’d be at a campfire in the BWCA.

What was your first favorite book?
The Secret Raft, a river-adventure, by Hazel Krantz, though I mostly remember reading Mad Magazine, Cracked, Sick, Crazy, National Lampoon, CARtoons, and comic books. And those Family Circus trade paperbacks.

Let’s say Fahrenheit 451 comes to life, which book would you become in order to save it from annihilation?
Desert Solitaire by Edward Abbey. I read it at least once a year or more and still make margin comments. Aside from Abbey’s influence on the environmental movement, his sentences are perfect, and the essays in Desert Solitaire are the best I’ve ever read: “Dead Man at Grandview Point,” “The Serpents of Paradise,” “Down the River,” “Cowboys and Indians,” etc.

What is one book you haven’t read but want to read before you die?
The unabridged version of The Anatomy of Melancholy by Robert Burton. I’ve read the abridged version, but not the whole. I will update my prescriptions before I tackle this one.