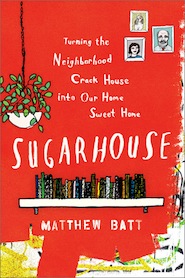 Sometimes when I’m getting these 6 questions ready to post I develop TigerBeat-style crushes on the answer-givers. These crushes are usually based on something like mentioning Mary Gaitskill or The Giant Jam Sandwich. In the case of Matthew Batt, it started early when we had two ‘currently reading’ books in common and hit a fever pitch when he mentioned Vincent D’onofrio.

Oh, what? Yeah, this isn’t about me. No, this is about Matthew Batt the author of the Sugarhouse: Turning the Neighborhood Crack House into Our Home Sweet Home which comes out today! Though the house in question is in Utah, he now lives in St. Paul and teaches at St. Thomas.

Now onto the answers!

What book(s) are you currently reading?
Scott Jurek’s Eat and Run. (I have both a running and eating problem, at least one of which is quite different from Jurek’s.) Chloe Caldwell’s Legs Get Led Astray (just digging in but loving it so far). Dylan Hicks Boarded Windows (which I just picked up at his book release). And lastly my wife and I have been fighting over a galley of Peter Geye’s forthcoming novel, The Lighthouse Road. (Far as I’m concerned, Peter Geye is doing for Minnesota what Hemingway did for Michigan, what Kent Haruf did for Colorado, and what Melville did for whales.)

Have you ever had a crush on a fictional character? Who?
My first reaction was Detective Robert Goren (played by Vincent D’Onofrio) on “Law & Order: Criminal Intent,” because I love the way he is both massively awkward, smart, and, you know, nuts, but in a way that brings bad guys to justice, sometimes just by leaning weirdly. Easily the most literary character on TV. Like Chuck Norris, but from Bensonhurst, and, instead of breaking things with his head, he uses his to think. If it had to be a proper literary fictional character, however, I’d have to say Gretta from James Joyce’s short story “The Dead.” Every time I read that story I wish I could have been her Michael Fury, willing to risk death from consumption just so I could stand outside her window in the rain. A clear (to me anyway) forerunner for the John Cusack character in “Say Anything,” albeit sans boombox.

If your favorite author came to Minnesota, who would it be and what bar would you take him/her to?
I’d take the late Andre Dubus to The Half-Time Rec, my local Como Park joint. Where else can you drink alongside salty neighborhood toughies, elderly country swing dancers in full regalia, and glinty-eyed, terry-cloth sweatsuited competitive bocce players? It’s like the whole perfect world, but with beer and pickled eggs.

What was your first favorite book?
Probably a tie between some Hardy Boys book (something about a suitcase containing the missing bust of Herbert Hoover–all I know is it kept me up all night until I finished it.) and The Giving Tree by Shel Silverstein (once the arboreal carnage starts you know the rest is inevitable, and yet you can’t look away–I still feel guilty just thinking about it.).

Let’s say Fahrenheit 451 comes to life, which book would you become in order to save it from annihilation?
Maybe it’s too literal a response, but Norman MacLean’s Young Men and Fire. I feel like Robert Redford would make sure A River Runs Through It would be safe, but Young Men and Fire hardly anybody knows. It’s beautiful and crushing book MacLean wrote about the Mann Gulch fire in Montana where thirteen smokejumpers lost their lives. It wasn’t published until after MacLean’s death, and that to me makes it extra worth saving.

What is one book you haven’t read but want to read before you die?
The Princess Bride by William Goldman. I could pretty much recite the whole movie, starting at any point and do it forwards and backwards, so I feel it would be courting a disappointment akin to death to read the book and not love it at least as much as the film. I so love that the book is presented by Goldman as an abridgment to a novel by S. Mortgenstern that doesn’t exist. (I meant to say Don Quixote, but this seems just as apt and a lot more likely.)