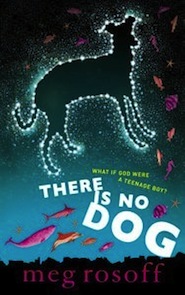 God, or Bob, falls in love with a beautiful human, and the more he tries to have sex with her the more his emotions mess with our weather. One day it’s torrential rain, the next water freezes, the next it’s scorching hot and flooding. When Bob is sexually frustrated, so is mother nature, and Bob’s second hand man Mr. B has to do the clean up.

I’d love to swim in Rosoff’s brain for awhile to see where she comes up with this stuff because this is all really imaginative. But I wish she would’ve brought more with the characters because none of them carry this into anything more than an imaginative romp.

Bob is really annoying, but he’s supposed to be a whiny, know-it-all teenager, so Rosoff pulled that much off, but other than that he’s pretty flat. I thought we’d get more out of him with the entrance of his mother, who won Earth for him in a hand of poker, but he seems to just snap at her like teenagers do.

Besides Bob’s mother, more characters are introduced like her friend Hed, his daughter Estelle, and Bob’s pet Eck who his mother lost in another poker game. With all these people there are many side stories that seem rushed and somewhat unnecessary. I don’t know if I wanted more with these stories or just wanted them to go away.

The best character is Mr. B, the man who worked hard his whole life trying to obtain his own piece of the universe, only to see Bob snatch Earth away from him and treat it so horribly. Mr. B is given an administrator position under Bob, though all the good things on Earth come from Mr. B and not Bob. Whales, for instance, are a creation of Mr. B, but during his six-day creation Bob messed around with fireworks and bugs that light up rather than taking time to create anything of interest.

I didn’t hate There is No Dog, but Rosoff can do better. I loved the story she told in How I Live Now, but here it all seems to fall flat. Great idea, not so great execution.