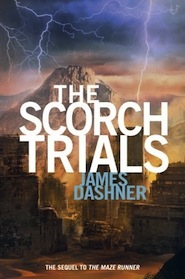 The last time we saw the Gladers in The Maze Runner they were being rescued and promised that the worst was over, but it all seemed very creepy. Like your skin is so soft it would make me a nice coat kind of creepy.

Mere pages into James Dashner’s The Scorch Trials the Gladers are told they have another test to complete. They need to leave their shelter, brave the brutal climate outside, and travel many miles within two weeks or they will die. They’re also told that a second group of kids will be trying to do the same thing.

It may seem easy to just travel miles, but since these Gladers have been locked in the maze, the Earth has changed. It’s a wasteland, with solar flares, blistering heat, lightning storms, and don’t forget the Cranks, the zombie-like humans infected with a disease known as the Flare. The Gladers have been told that they’ve been given the Flare but if they make their two-week journey they will be given the cure. Turn into a zombie or walk miles through storms that could kill you? Hmm.

With the storms, zombies, and fights the Gladers have with the other group of kids, The Scorch Trials is non-stop action. They leave the compound but BAM! A skin dissolving monster tries to eat someone’s head. They get away from the monster and BAM! Storms with constant lightning hit the ground and burn some of them to a crisp. They make it through the storms and BAM! A gang of humans trying to survive attacks them. Once they calm down and think they have a second to rest they’re bitch slapped with something new. Dashner is good at creating tension, conflict, twists, and a whole lot of action.

Just like The Maze Runner, I wish some of the characters were more developed, but it didn’t bother me as much in this one. Maybe I’m getting to know them more and more, or maybe the action just moved it along too fast for me to care, but I did like this one better than The Maze Runner. The destruction of our world, the psychological tests the Gladers are put through, and the mystery of why they’re being put through this is great. I hope the last in the series, The Death Cure, will continue with the action of The Scorch Trials.