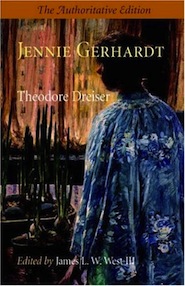 There is something so delicious about scandalous lit from 1911. To wit: The beginning of Jennie Gerhardt by Theodore Dresier had me cackling like a fourteen-year-old boy.

The Gerhardt’s are in the muck. Pa Gerhardt has been sick and unable to work. There are a handful of kids that need shoes and bacon. Mrs. Gerhardt and her eldest daughter, the eighteen-year-old Jennie who is coming into her peak fresh-faced years, take a job cleaning a fancy hotel. This puts them in the path of an older senator, who lives at the hotel and who takes a shine to young Jennie and eventually begins buying her gifts, sneaking money and favors to the family and otherwise trying to woo the young girl.

Old man Gerhardt gets a little crazy when he hears through the grapevine that his daughter is taking nighttime strolls with a man his age, and bans their friendship. But when her older brother gets thrown in jail for stealing coal, and no one has the money to get him out, Jennie sneaks out to ask a favor of the senator — then repays him in sweet, sweet, love.

She gets pregnant; He makes her a world of promises that he just can’t keep, what with the limitations of modern medicine. So young Jennie is in a pinch. Soiled by the evidence of her sexual activity. Another mouth to feed. The family uproots itself for a new life in a new town with a whole new set of wealthy men, including one wild stallion who doesn’t like the idea of domesticity, but he does like the idea of settling into something similar with Jennie.

Lester Kane comes from big money and big obligations and he and Jennie keep up a super secret affair for years, living together-ish in Chicago. But when his sister stumbles upon the unholy union, she freaks and this has all sorts of monetary ramifications for Lester who must decide between a modest life with Jennie and a rich life without her.

So much drama and heartbreak. Theodore Dressier’s novel is a wicked one, a little repetitious and slow-moving in parts, but ultimately about as gooey as hiding in the closet with a flashlight and reading Wifey. It’s a total pleasure cruise, made better by the fact that it’s a free download thanks to Project Gutenberg.