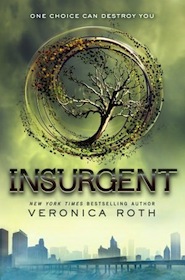 Insurgent is the second book in the Divergent trilogy by Veronica Roth where in a future Chicago everyone is placed into one of five factions: Dauntless, the brave warriors, Abnegation, the selfless, Erudite, the knowledgeable, Candor, the honest, and Amity, the peaceful.

In the first book, Divergent, we followed Beatrice Prior, an Abnegation-born girl who switched to Dauntless when she was sixteen. By the end of the book the factions were beginning to crumble. Erudite leaders were using mind control to turn the Dauntless into their warriors so they could take out the other factions and the factionless, the people living on the streets after having been kicked out of their factions. We ended with Beatrice and her friends seeking solace in the Amity compound and that’s exactly where the second book starts.

Insurgent is a hard book to review because so much happens, yet nothing is all that exciting to warrant praise. This book was definitely not as good as Divergent.

The one thing that keeps this book moving is a secret. At the Amity compound Beatrice overhears faction leaders discussing a piece of information held by the Erudite that would tear apart their whole world. She doesn’t know what this information is, but throughout the rest of the book she puts herself in very dangerous situations to try to find out.

Other things happen, but nothing was all that interesting. They start forming alliances with the factionless. There is some fighting with the Erudite and even some scenes of torture. And by the end we do find out what the secret piece of information is, but even it doesn’t seem all that earth shattering.

The biggest reason that this wasn’t as good as Divergent is that there is so much time spent on things that don’t really advance the story. There is a lot of repetition with the action, a lot of which doesn’t do much for the overall plot, but it’s nowhere near as bad as all the scenes trying to build the sexual tension between Beatrice and her boyfriend. In the middle of a war her boyfriend tries to get some, but almost every time Beatrice stops it to either cry about their situation or talk through yet another theory she has about the secret. Yawn.

Insurgent wasn’t horrible. The action and mystery about the secret does move it along, but 100 pages could be cut to make it a much more cohesive story. I hope the final book is more like Divergent and I hope the secret piece of information is actually much more damaging than it sounded to me at the end of this book.