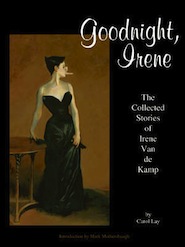 I found a gem tucked into a bookshelf at a huge novelty shop that sells things like candy cigarettes and anime-wear. It had a steampunk taxidermy art show going on in a small attached gallery.

I was scanning the comic book section looking for work by women, pulled a maroon book off the shelf and read its introduction. Within the first paragraph artist Carol Lay mentioned Ubangi women featured in Hustler magazine, a DC collection of romantic comics, and a bummer state-of-the-relationship conversation with a boyfriend in 1979. On the next page: A foreword by Mark Mothersbaugh of Devo.

One of the highlights of my recent vacation was the discovery of longtime, much-published Lay’s Goodnight, Irene, a collection of Irene Van de Kamp stories from the 1980s with some yet-unseen stuff. It is so ridiculously fun that snorting and cackling become involuntary.

The premise: Young Irene is orphaned when baboons attack her parents during a safari. She is taken in by native hunters, the Bongodians, and raised by the tribe. When she comes of age, she eagerly goes through the traditional ceremony in which her lower lip is extended with the help of an ivory plate and her upper lip is looped up over her nose.

Though she has undergone a rite that assures her beauty matches that of the other women in the tribe, her white skin is deemed unlucky and none of the men will risk marrying her. She decides to leave the tribe and joins up with white traders and returns to the United States where a birthmark reveals that she is an heiress and now the richest woman in the world. Unfortunately. . . her face.

She begins dating a blind man, a lawyer, who is unaware of her money situation or her appearance. She keeps things chaste until finally he can’t take it anymore and asks to feel her face. When he encounters the jutting lip he freaks and dumps her and, meanwhile, Irene attends a cosmetics party where things get uncomfortable. (In one of the images from the book, she stares at a tube of lipstick with wide eyes and a question mark bubble).

Her now ex-boyfriend takes his woes to a bar and explains the situation to a bartender, who determines that Irene is the heiress who has been all over the tabloids. Kurt suddenly expresses renewed interested. Unfortunately, his plans to get the band back together are thwarted when Irene is kidnapped right in front of him and an unscrupulous cab driver takes advantage of his blindness to steal all of his money and send him away on an airplane to nowhere-near-Irene.

All sorts of unconventional characters crop up including a two-headed collector of unusual women who has an entire island at his disposal, a woman with an extended neck, and an evil three-breasted seductress who is out to get revenge on Irene.

These stories are hokey as heck and play on the uber-seriousness of romantic comics of yesteryear. They are self-conscious enough to in-joke about beauty and the nature of comic books. The predictable is taken and twisted into something very funny and not predictable, like the three-breasted woman who gets Kurt drunk and tries to convince him to have his face surgically changed to look more like Irene’s to win her love again.

As a nice add, Lay introduces us to Irene’s daughter — who as a teen really resents her conventional face and begins computer doodles of how she can make her own look more interesting.

Lay also explains in the introduction that Irene was born of her work inking Donald Duck and Scrooge comics mixed with the cutesy girl hairstyles from “Heart Throb” comics. Anyway, all of this happened a long time ago, but since it’s new to me I’ll say this — especially after being bored to brain itch by Alison Bechdel’s latest — comic books just got fun again.