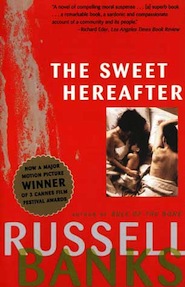 On its surface, The Sweet Hereafter is a story about a disastrous bus crash and a town’s struggle as it tries to find a place for its own grief over the children who were killed. But it’s really more about the loss in a wider sense. Three of the four characters who narrate portions of Russell Banks’ novel have lost their children, not always to death, and the fourth, her innocence. It’s a powerful theme, but the way Banks uses it makes me think he would have done better to make The Sweet Hereafter a short story or a novella rather than a full-length book.

The Sweet Hereafter is set in a hardscrabble town in upstate New York where the children – and the chance for a brighter future elsewhere they represent – are one of the only things making each day worth waking up to. One fateful winter morning, the bus carrying many of the town’s children to school swerves off the road, rolls down an embankment, and crashes into an ice-covered pond. The school bus driver, Dolores Driscoll, is tormented by the thought that she could be so careful and responsible and still have such a tragedy happen on her watch. Parents of the children killed are rendered inconsolable and one of the few survivors, Nichole Burnell, finds a twisted use for her newfound power as a rare articulate, surviving witness to the incident.

Nichole is one of the book’s weakest links. It’s hard to believe a sheltered fifteen year old could become as savvy and devious as she, even when the reader learns a revelation about her past. Her story is a gash in the integrity of the novel’s plausibility. It’s also hard to feel empathy for Mitchell Stephens, the lawyer who, like many others, scavenges the town for clients. We know his daughter has been wrested from his life by AIDS and drugs, but for some reason that doesn’t make him much more sympathetic. The characters of Dolores Driscoll and the grieving parents are more touching and convincing, though they are also more conventional; they’re well-rendered drawings of exactly the kind of people you’d expect to find in such circumstances.

So would The Sweet Hereafter be better focusing solely on these characters? It’s true that Nichole and Mitchell are different and so are meant to elevate The Sweet Hereafter beyond the obvious, but they don’t quite succeed. Maybe winnowing the novel down and tightening the scope a little would have resulted in a better, more concentrated story.