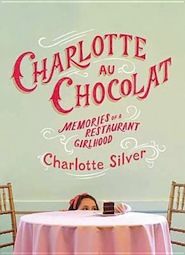 In the 1980s, Charlotte Silver was the party-dressed princess of her parents’ restaurant Upstairs at Pudding, a sometimes hot spot in Harvard Square. She was served bottomless glasses of Shirley Temples, doctored to her Maraschino cherry and citrus garnish specifications. She sometimes napped beneath the bar. She ate dinners of pheasant and Roquefort flan at table A-1. She developed friendships with the steady stream of employees who breezed through the restaurant.

Charlotte au Chocolat: Memories of a Restaurant Girlhood is her story of being raised in this environment. At first both her parents work together at the eatery: Dad as head chef; Mom on pastries. When the former cuts out in favor of a more Bohemian lifestyle than cooking at this epicenter of preppy-hood that regularly features doo-wop singers, Silver’s mother takes over ruling the roast.

Silver’s mom is the star of the story, a hard-working tough cookie with a strict rule about not crying in the dining room. Once a Kim Novak lookalike, over-sized sunglasses always in place, a short busty woman proud of her tiny waist and belief that tiger-striped prints are a neutral. She was referred to by at least one employee as “Patton in Pumps.”

Young Charlotte, meanwhile, comes to every meal wrapped in one of her fancy party dresses. She practices manners on the wait staff, always addressing them by name and thanking the back of the house after every meal. She comes of age in this space, growing too big to sleep beneath the bar, sometimes sharing a shift with an eccentric Italian-ophile working at the coat check, eventually playing touchie-feely with those temporary summer employees on college break — a crew she refers to as her cabana boys.

In its best moments, this book provides a quick-hit portrait of a kitchen character like an alcoholic chef who refers to her as “Shorty” or the woman from the coat check and the way the spent nights, months, considering possible names for Marlon Brando’s offspring.

Unfortunately, most of the time the story has that artificial prettiness of a dining room with a great dimmer switch. Her memories shimmer and Silver gives only passing mention of the suddenly absent father and mother who is up to her elbows in her signature red pepper soup and whether she, as a child, was resentful, bored. There is a curious amount of focus on what she is wearing — from the party dresses, to the time when she was at school and puberty busted two buttons from her dress leaving her chest bared, to a sudden interest in vintage clothing and how she was one of the rare people who could fit into a classic 1950s dress.

Silver is in college when she learns that her mother has lost the lease on the restaurant and that it will close in the summer. In real life she struggles to find the right way to say goodbye to the space she once used as a permanent address during a period of frequent moves to different apartments. In the book, she struggles to write about what it has all meant without getting the page sticky with word frosting.

This story is a quick read, pleasant enough, but probably won’t stick to the ribs. It seems like a good fit for people who frequented the restaurant or worked at the restaurant, but in terms of a memoir with mass appeal, it’s a little too light on real life, heavy on pretty portraiture. There are some thoughts on the changes in the food industry — how things went from smoking line cooks to celebrity chefs to fashionable food — and changes in the Harvard Square neighborhood, including the end of a great sandwich shop and the beginning of an Abercrombie & Fitch.