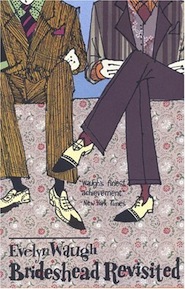 I’m a slave to universe cues, and this time the world was telling me to read the novel Brideshead Revisited by Evelyn Waugh. The title just kept cropping up here and there and I continued to stumble on references to it even as I was reading it. This, of course, just meant I was following the right arrows. Jay McInerney, in the introduction to a new book of essays on wine, writes about a scene where two characters spend a summer first ceremoniously, then not-so, working their way through a wine cellar; In Charlotte Silver’s restaurant-life memoir, she frequently mentions a character she related to as a child. I’m reading it, okay?! I wanted to shout, fist raised.

Anyway, turns out the universe was right: Two weeks later this book has landed a spot on my list of all time favorites. Not to mention I’ve now earned the right to make my own Brideshead Revisited comparisons. “My God. This is so Brideshead Revisited,” I said, watching the series finale of “House.”

Refresher course from that Catholic literature elective you took in college: The story opens with an older version of Charles Ryder, now a captain in the army, moving along with his troops. The military is using an estate as its base, a place that means a lot to Charles and sends him into mad flashback mode.

He is in college when the eccentric Sebastian Flyte barfs through the open window of his dorm room. Charles is absorbed into Sebastian’s circle, friendship follows and soon the two are inseparable in a way that leaves readers wondering: gay-or-nay? Sebastian is an eccentric, an aristocrat whose family owns a gigantic estate — like basically a castle — called Brideshead. The two travel, they drink, they spend a summer doing wine tastings with the contents of the wine cellar and sun bathing naked on the roof of the house.

Sebastian’s drinking never tapers, though. And soon he’s drinking alone and getting in trouble and it’s bad enough that his family takes action to deny him the drink. He’s a slippery sucker, though, and continues to slosh his way through the world. Charles is eventually abandoned. First because Sebastian is sent away to dry up, which doesn’t take, then because Sebastian’s family gets rankled when Charles helps his old friend obtain booze during a holiday break at the house.

Life goes on for Charles. He becomes an artist of architectural scenes. He gets married, using the loosest definition of the term “married.” There are two kids. This all goes askew when he runs into Sebastian’s lookalike sister all these years later while traveling by boat through rough waters. “He seems to have a penchant for my children,” Sebastian’s estranged father Lord Marchmain says at one point.

There are quite a few things going on in this book, including the relationship between Charles and Sebastian, never overtly consummated, but still some sort of first love. Then there is alcoholism, and the sneakiness involved with working around the roadblocks Sebastian’s loved ones erect in an attempt to dry him out. And of course there is Catholicism. Sebastian’s family is a portrait of a family in flux: Devout mother, dubious sister, Sebastian’s religious core that oozes occasionally to the surface and Charles’ agnosticism. These definitions shift and resettle throughout the novel and also provide one of the most comedic scenes. Sebastian’s sister Julia plans to marry Rex, an older man with political aspirations. Her mother wants Rex to convert to Catholicism and he’s not opposed to it. He goes into sessions with a priest willing to accept anything the man says without thoughts or questions, with just an eagerness to sign up and have a huge wedding.

Mostly this book is just a riot. Conversations and correspondences between Sebastian and Charles and Charles and his father are the sort of witty banter that made TV so much fun in the 1990s. The universe was right (this time).