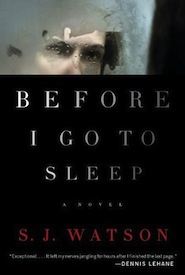 Riddle me this: what can cause a woman to lose twenty years of her life every time she falls asleep? According to S. J. Watson, brain damage from a tragic accident.

I’m no scientist. When I was five I really wanted to be Sally Ride until I discovered knowledge of science was a big part of her job. So to be fair, I really know next to nothing about the intricacies of the human brain. But with a traumatic head injury, can you lose your memories every time you sleep?

That’s the premise behind Watson’s psychological thriller Before I Go to Sleep. Twenty-five years ago Christine was in a tragic accident. Ever since, when she wakes up from sleep she thinks she’s still in her mid-twenties.

On a typical day, Christine wakes up next to her husband whom she does not know. Thinking she had a dirty one-night stand, she slinks into the adjoining bathroom only to look in the mirror and see a much older woman. When her husband wakes he fills her in on her accident, memory loss, and marriage to him. He heads to work while she lingers around the house, not recognizing a thing.

Until one day when Christine gets a phone call. A doctor calls to tell her he’s been working with her for a few weeks and she has been recording lost memories in a journal. The rest of the book is comprised of Christine’s journal full of pieces of memories, confusion, and her husband’s lies.

Before I Go to Sleep is definitely a psychological thriller, but it’s not an edge-of-your-seat kind of thriller. This doesn’t mean it’s not interesting. I turned into this amnesiac woman, confused and scared with what I was reading, wondering why my husband would withhold things from me. But this is definitely a mild thriller, not one where I ignored phone calls and turned off the latest episode of “Eureka” just so I could keep reading.

The part of this book that goes downhill is the ending. I won’t give it away, though you will easily be able to figure it out on your own. Early on I pieced it together, but I was hoping my instincts were wrong. I wanted it to be more complicated. More interesting. More. . . something. But it wasn’t. It is the ending you imagine and it’s such a let down.

And the speech in the end? Come on. It’s like when you watch an episode of “Monk” and you wonder why the killer confesses in the end when the stuff Monk says has no physical evidence. Is it a guilty conscious? Is it Monk’s hypnotizing curly hair? Whatever it may be, the same type of ending happens here and I turned into a big ball of snark. The ending is just so stupid and nowhere near as interesting as the rest of the book. I wanted to be amazed in the end, but what I got was a Lifetime Movie spectacular. Good start, crappy ending.