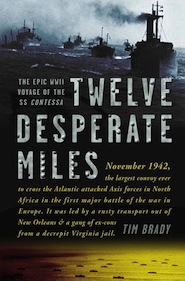 While setting up this little interview with Tim Brady author of Twelve Desperate Miles: The Epic World War II Voyage of the SS Contessa and The Great Dan Patch and the Remarkable Mr. Savage, I told him about working at my parents’ bowling alley, Dan Patch Lanes and how I’d often have to explain that Dan Patch was a horse, and not my dad.

Tim told me that while doing a signing at the State Fair, a man approached and asked him if he was Dan Patch or the Remarkable Mr. Savage. Perhaps you have to be from or have spent time in Savage, Minnesota to find that absolutely hilarious. It still makes me laugh.

I bet Tim will probably make you laugh if you go see him read at 7 p.m. on Thursday, May 17 at Common Good Books (38 S. Snelling Ave, St. Paul, MN). Now, on to Tim’s answers to our six questions.

What book(s) are you currently reading?
I’m currently reading Hedy’s Folly by Richard Rhodes. Haven’t arrived at the really good parts yet—where the beautiful Hollywood star, Hedy Lamarr, invents the technology that will ultimately lead to wireless phone and GPS systems, but I’m fast turning pages to get there.

If your favorite author came to Minnesota, who would it be and what bar would you take him/her to?
Don’t know if I can pinpoint a single favorite author, but I would be happy to see a gathering of narrative history writers like Laura Hillenbrand, Erik Larson, Nathaniel Philbrick, and the ghost of Cornelius Ryan. Can we do a coffee house instead of a bar?

What was your first favorite book?
It was a kid’s biography of Daniel Boone. Have no idea what the title was, but I checked it out of the local library so often that I recall my eight-year-old self feeling embarrassed by my own lack of originality as I’d take it up — yet again — to the librarian’s desk.

Let’s say Fahrenheit 451 comes to life, which book would you become in order to save it from annihilation?
I guess I would become that Daniel Boone biography. Though I would hope to update Ol’ Dan’l’s flintlock weaponry for the task.

What is one book you haven’t read but want to read before you die?
The one at the bottom of the stack by my bed.