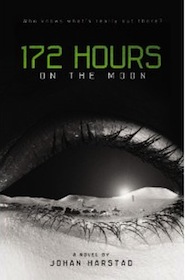 It’s 2019 and NASA needs to go back to the moon. You see, when they were bouncing around on the moon in the 60s and 70s, they weren’t doing it for the photo op. They were building a secret research facility in the Sea of Tranquility to investigate mysterious signals received on Earth from the moon. Before they could really investigate, the public lost interest in missions to space and their budget was cut, so they never actually used the research facility.

But they have to return to the moon to use it because they started hearing the signal again. So how are they going to hold the world’s interest and gain funding? Hold a lottery where three teens, from nations around the world, would win a trip of a lifetime to the moon.

You can probably guess that this doesn’t go very smoothly.

At first I thought this premise of Johan Harstad’s 172 Hours on the Moon was silly. Why would the world buy into teens doing something that could potentially be dangerous? But then I remembered Christine McAuliffe. I was in second grade and we had been reading about Mrs. McAuliffe and the Teacher in Space Project the whole year. A teacher was going to space? Wow!

On the day the Challenger took off, our whole elementary school was in the library (I lived in a small town, so, yes, we could fit in the library) to watch it live. How could we not watch the first teacher in space?

You all know how that ended. Some kids were in tears, some were confused, and I just remember the shot of Mrs. McAuliffe’s mother, looking up at the sky, not knowing what happened, but clinging to hope that she wasn’t seeing what she was seeing.

The idea of putting a teacher in space had every school in the country energized and excited about the space program. Would holding a worldwide lottery where teens would explore the unknown garner the same interest? You bet it would. I can see the special Highlights issues now. I can see all the teens strutting across Ellen’s stage. I could buy into this, at least enough to go with it and enjoy the rest of the story.

And enjoy it I did. I really liked this book.

The three teens that get picked for a trip to the moon are Mia from Norway, Midori from Japan, and Antoine from Paris. We follow the teens before and during their space mission, but Mia is the real heroine here. We see her more and she is a great character, especially because she didn’t even want to be a part of the lottery. Her parents entered her name without her knowing. She was going to back out and then thought it might help her band gain some fans, so she relented.

The teens here are great and completely believable. Much of the beginning is spent learning about them, how their names were entered into the lottery, and how they were chosen. I thought the character development was great and they felt like real teens.

Some of the book is a bit rushed, for instance we don’t learn much about their year-long training before the moon mission. I was fine with that, though, because I wanted to get to the moon. Throughout the lottery and training we are given glimpses that in past space missions, things weren’t as they appeared, so I wanted to get to the action. By the time they got to the moon I was scared and by the end of the book my heart was jumping.

Overall, this is a great book. Some things aren’t fully explained or seem to go by too quickly, but I think everything else overshadows this. I really enjoyed it and would highly recommend it.