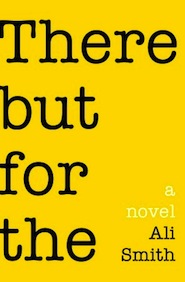 I was robbed by a British author. Not cool, Ali Smith. The masses were bleating favorably about the novel There But For The and frankly the premise seemed so intriguing: A man at a dinner party with a collection of strangers gets up, goes upstairs, and locks himself in a spare room — luckily one with a bathroom, unfortunately at a house not very sympathetic to his vegetarian diet. He refuses to come out for days, for weeks, until he becomes a folk hero and the locals camp out and wait for a glimpse of him.

This is such a great idea. Who is Miles? (Or Milo, as he’s being referred to by the media). What’s he doing in there? (Is he talking to himself? Pacing? Moving from furniture surface to furniture surface, like the star of a super hot one-man show, a dramatization of the circumstances, that is playing at a small local theater?) And mostly: Why did he do this?

Instead of capturing the story’s most mysterious character, Smith dances around the outside. She presents short stories about people who have known Miles pre-lock down: A woman named Anna who met him while abroad in 1980 with other students, winners of a writing contest where entrants considered life in 2000. The Scottish misfit is having a wretched time until Miles finds a common interest with her, engages in some witty word-play banter, and provides her entry into the group.

Then there is my favorite, Mark, an older dude who meets Miles while at a production of “A Winter’s Tale” and they find the beginning of friendship while considering whether the mistimed ringtone from the audience ruined the moment or added to it. They end up going for drinks to chat more, and Mark invites Miles to the dinner party.

May is an elderly woman who has had a stroke. She’s seemingly unable to speak, shocked by her own aged body, a little confused and memories are shooting through her mind — including movies she saw when she was a teen and an old friend of her daughter, who died when she was young. In a last gasp for life, a girl (who is related to the owners of the home where Miles is locked in) takes May on an adventure that doesn’t end well. Miles was friends with May’s daughter and after the young girl’s death he makes a yearly visit to the elderly woman on the anniversary of her death.

The final word goes to Brooke, a tween who is just a little too smart, enjoys puns and history, a quirky and curious daughter of two intellectuals. She also thinks and talks in a rapid flow, stream of consciousness. It’s like, kudos on character development, unfortunately her voice felt like someone was picking at a scab on my brain.

As for Miles? No idea. We learn little about him beyond what these people remember: He was a kind teen, a good conversationalist, a thoughtful man and a vegetarian.

There were times when I liked this story. To be fair, each of the short stories is an interesting slice. And the dinner party hosted by Gen Lee is a kick. She and her husband invite a bunch of mostly-strangers and then see what happens. It’s just something they do. This time they’ve paired smart and articulate neighbors with a man Mark has secretly been banging (and his wife) and a few loud mouth idiots who hate art. The result is the most uncomfortable dinner party, you’ll actually squirm, in the history of placemats.

There is also some commentary on becoming a pop icon. The people gathered in the yard, selling Miles-themed T-shirts and psychic readings and holding signs. Gen Lee, the homeowner, first extremely put out by the intrusion, then finds ways to turn it into a money-making venture. But these little nuggets are few and far between tedious passages.

But the elephant in the room, or the unwanted guest in the room, is Miles. There are, admittedly, a lot of reasons to lock oneself in a stranger’s spare room. We’re all just a single impulse-control glitch from doing some pretty uncharacteristic stuff: punching the accelerator, shoplifting cheap lipstick, chopping all our hair off. Or maybe he is exhausted. Like my friend Hank used to say: “Who wouldn’t want to hole up in a padded room and play some balloon volleyball for awhile?” Maybe he’s on the lam from the mob or an overbearing mother. The point is, there is no right reason. And that bugs.

You know what this is, Ali Smith? You lured me to your store on a snowy night with the promise of selling me the TV I wanted at an inexpensive price. But when I got there, you didn’t even have that TV in stock. Blerg.