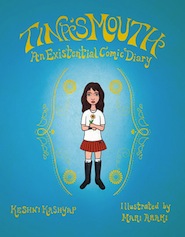 Mr. Moosewood, AKA Moose, a popular stoner-hippie teacher — ponytail and all — assigns the students in his AP elective a semester-long project of self-discovery that asks “Who are you and who are you becoming?” Fifteen-year-old Tina M. decides to keep a diary during the semester, letters to John-Paul Sartre, in Tina’s Mouth: An Existential Comic Diary by Keshni Kashyap, with illustrations by Mari Araki.

The assignment comes just in time. Tina M., Indian-American, three siblings, a decent student and violin player often seen wearing a “Six Pistols” T-shirt, is in crisis. Her best friend Alex Leach, once practically an appendage, has dumped her for a more popular pasture that includes a new boyfriend. Tina, yet un-kissed, is obsessed with going mouth-to-mouth with Neil, a friendly skateboarder who doesn’t seem not-interested in her. In the meantime, she’s taking a lot of lunches alone and trying to find her place within this upper-tier school in California and its cliched caste system.

There is some chaos at home, too. Her artistic older sister is back living with their parents after studying architecture in college and then being jilted by her first serious boyfriend. Her brother is an underclassman at Stanford, information that is upping his resale value on dating websites. He’s looking for a wife.

Tina M. eventually finds a few other loners to spend time with and is pleasantly surprised that she can chat about philosophy and intellectual pursuits with her new friends, rather than just waxing hysterical about boys, which is her old bestie’s new scene.

The art is spare, black and white line drawings, generally light in details, and it’s not always easy to tell which of Tina’s friends or non-friends are represented. These drawings seem secondary to the text, anyway, as there are huge blocks of words that bring this pretty close to the illustrated novel category.

This book, told in episodes, is cute. In one scene, a friend of her mom’s gets wrecked on wine and doles out some life advice that becomes increasingly drink-influenced and incoherent. In another scene, Tina goes bike riding with Neil and has this adorable one-on-one that includes the merits of Neil Young and the definition of nirvana — not the band. And in another, Tina’s family tries to set her sister up with a marriageable man with whom she has nothing in common. Instead she falls for a much-younger tagalong who believes her to be a brilliant artist.

Cuteness aside, there isn’t too much here that is new. It’s still the age old story of teen alienation and eventual recovery, but with Sartre thrown into the mix. It sort of feels like the late 1990s or early 2000s when there was an onslaught of teen movies that were all just okay. They weren’t offensive or terrible to watch, but they were pretty predictable and you could probably guess the plot — and even some minute details — by just watching the trailer.