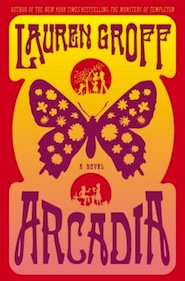 There were times in the midst of reading Arcadia by Lauren Groff where I thought to myself, “I would totally love to live in a commune.” But then I would close the cover of the book and remember that I’m an angry hermit.

It’s not that Groff paints the commune as a halcyon of hippiedom, in fact it’s anything but. And yet, it’s still compelling. Arcadia is the dwelling spot of the “Free People” led by a charismatic singer named Handy. The group settles on a plot of land one of their trust-funded members gets for cheap off his dad, and set up a kind of hippie shanty town before they renovate the dilapidated mansion that will house them all.

The story of Arcadia is told through Bit Stone’s eyes at different points in his life: a child, a teen, an adult, and an older adult. He’s the first child born on the commune to Abe and Hannah, two of the founders. Bit’s a bit precocious and some of the early chapters of the book are a little hard to swallow because he seems to have entirely too much insight and wisdom for a five-year-old, but because it’s Lauren Groff and the writing is so engaging, you kind of let go of that niggling doubt and follow along.

The commune really is a thing of wonder. It feels a bit like a Marxist utopia: “from each according to his ability, to each according to his need.” They work, cook, build and farm, birth and raise children communally. When someone gets out of line they have Creative Critiques, which basically involve the other hippies getting together and venting to you about how you’re being a jackass, at least in their eyes.

Even as a child Bit detects the the cracks in the commune’s infrastructure, the tensions that flare up between Abe and Handy. As he ages it’s harder to ignore, but he has other things on his mind: the hots he has for Helle, Handy’s dreadlocked daughter; the secret pot patch that is supposed to save Arcadia; and the odd vibe blowing through during the Cockaigne Day celebration where acid-laced Slap-Apple is plentiful.

The rise and fall of Arcadia is quite engaging, and the commune is the star of the show with actual characters, aside from Bit, getting short shrift. There are tons of names thrown about but the people they represent are hard to discern. They’re just a big jumble of hippie, which is understandable when we’re on the commune but as we follow Bit through his life, it’s harder and harder to feel anything than mildest interest when you learn the fates that befall these minor players. It’s the emotional equivalent of that feeling you get when you read on Facebook about how that one guy in 10th grade English just had a baby with his wife. “Oh.”

But still, even with the hippie jumble, the book is a damn fine read. Bit’s a smart, interesting guy who struggles with the ideals of Arcadia and the way the actual world works. Watching him grow and learning about what happens in the intervening years (we jump from 5ish to 14ish to 40ish to 50ish) is fun, and even though the reader doesn’t know who some of the hippie characters are, all that really matters is how their outcomes effect Bit, and to some degree his parents. Hannah and Abe really come on strong in the last third of the book, which is great and saves it from a really pointless subplot about a deadly plague that wipes out tons of people all over the planet.

I enjoyed the hell out of Arcadia almost as much as I did Groff’s first novel, The Monsters of Templeton. Her writing is so beautiful and specific to the world she’s creating that you get swept along and will lose hours before you realize it. It’s the best kind of reading, where you get so enveloped in the story you forget where and when you are and it takes you awhile to come to after you shut the book.