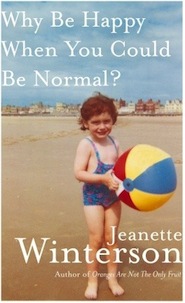 I read memoirs because it is more polite than staring at people, which doesn’t mean I do the latter any less. I like the what-has-it-been-like-for-you-ness of seeing someone’s bullet points and knowing it must all turn out reasonably okay, because they were able to pop a squat and push out these thousands of words afterward. Most memoirists — except Annie Dillard — have lived through some sort of circus and that’s why they get to make a book about it.

In Jeanette Winterson’s memoir Why Be Happy When You Could Be Normal there is definitely a circus. A cold, religion-brandishing adoptive mother — always referred to clinically as Mrs. Winterson — who locks the young girl out of the house at night and eventually orders up an exorcism to pray away the gay. It’s tough living for young Jeanette, who doesn’t fit in with kids and at home is told repeatedly by Mrs. Winterson that the devil led the Wintersons to the wrong crib when they adopted her. That they should have taken Paul, one crib away, who would never be as badly behaved as Jeanette.

Jeanette moves out of her family’s home and into a friend’s car when she is 16 years old. Later, she’ll be taken in by a teacher who will help coax her toward escape from this sort of Oliver Twist-ian existence. In the second half of the book, Winterson writes in real time about the search for her birth mother. The paperwork and the madness and the details that slowly emerge.

Winterson’s circus is definitely a shit show of horrors, touches of “Mommy Dearest” if Joan Crawford was never famous and instead raised her daughter on boiled potatoes and had an outhouse instead of an indoor bathroom. Mrs. Winterson is a woman who seems to think there that happiness is a sin.

“Sometimes she seemed happy, and played the piano, but unhappiness was always close by, and some other thought would cloud her mind so that she stopped playing, abruptly, and closed the lid and walked up and down, up and down the back alley under the lines of strung washing, walking, walking as though she had lost something.”

The best parts of this story come in the slices of normality, young Jeanette’s love affair with books. Obviously, books were banned in her home, but she bought them anyway and squirreled them away beneath her mattress. She spent tons of time at the library, making her way from A to Z in the annals of English Literature. Also dipping out of line to memorize some poetry. Occasionally bantering with a teacher or librarian about Nabokov. This is what eventually saves her heavier damage, or, one of the uglier fates she considers: A life married to a man, a few kids, a desk job and a spray tan. Words save her, especially when she realizes she has a way of arranging them in a crowd-pleasing way.

I like how Winterson tells this story in this nonlinear way that kind of dips and dodges. And I like the texture of her writing. This is a good introduction to Winterson’s writing.