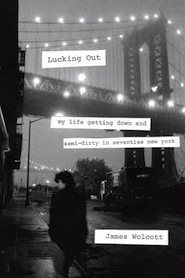 It starts with a young James Wolcott riding a ref from Norman Mailer to the grunts of the Village Voice offices. One of those “I like how you write, if you’re ever in NYC, stop by X and ask for Y and he’ll hook you up” scenarios Wolcott took seriously enough to drop out of college, pack his bags and knock on the door. Of course, it took a few more knocks than he probably expected, but soon enough he was jamming out words with the likes of rock critic Robert Christgau on the receiving end of a fan-call from Pauline Kael who invites him into the coveted back row of interactive movie screenings with the master.

Lucking Out: My Life Getting Down and Semi-Dirty in Seventies New York by longtime writer for Vanity Fair, a freestyle riff, spends a lot of time at the table with Kael and her ghost will continue to pop up in tidbits of ancient lit gossip and the writing tips that ring in Wolcott’s head. Homeboy certainly knew when to pencil down one of her kicky lines when he heard it. In fact, he’s channeling her the first time he sees Patti Smith on the stage at CBGB and needs to go finger pads deep with a typewriter stat.

“One thing I learned from Pauline was that when something hits you that high and hard, you have to be able to travel wherever the point of impact takes you and be willing to go to the wall with your enthusiasm if need be, even if you look foolish or ‘carried away,’ because your first shot at writing about it may be the only chance to make people care. It’s better to be thumpingly wrong than a muffled drum with a measured beat.”

The next period in Wolcott’s life is the pornography to ballet transition and the latter sticks and he becomes a lifetime aficionado. The first time he goes, it’s a whim, a pick for his “cultural merit badge.” Eventually he becomes a subscriber who finds it not entirely unlike the punk scene he was accustomed to, with the way it challenged audiences. He eventually ends up married to a rock critic.

This book is equal parts dull and sexy, with his stream of conscious style sometimes turning into the list of names Wolcott seemingly wants to thank for this award. This includes his days at the Village Voice where the clunkiness of names atop names lends to the question: “Who are you writing this for, brah?”

Wolcott is a word-guy, no doubt, and he doesn’t squander one, writing sentences with so much meat. His scenes are colorful and his knowledge of pop culture is broad as it is deep. I wouldn’t really call this story a memoir as much as I would a museum of 1970s New York City, one of my top picks for a time travel destination, and Wolcott as the curator who decided what to show us and why. He’s there, all right, standing in the corner observing and even participating. I’d imagine that years of writing about other people would make it hard to actually turn the pen on himself. He occasionally mentions private details — a bit of a love triangle that involved an unnamed woman and Lester Bangs — or that time his apartment was broken into. But there isn’t a lot of personal reflection and the toll of the Talking Heads on his emotional well-being. He surrounded himself with enough interesting people — Kael, Smith — and crossed circles with enough others — Pete Hamill, Joan Didion, Bangs — that there are plenty of nuggets for the 1970s NYC-inclined.