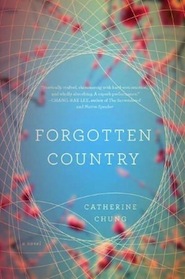 Janie takes her role as eldest daughter seriously in Forgotten Country, Catherine Chung’s debut novel about a family that comes to the United States out-running potential political persecution in their home country, Korea.

Hannah, her younger sister, has a bit more moxie. When the family’s traditions start to weigh her down, she runs away to California without leaving a forwarding address. Janie’s resentment toward her grows when their father is diagnosed with cancer and eventually decides to return to Korea, where treatment options surpass what can be done for him in Michigan.

Janie tracks down Hannah on the coast and the sisters have a fight. Hannah is incredulous because her sister doesn’t understand her position; Janie freaks because Hannah was so selfish to leave the family wondering about her safety and whereabouts, so she lies to her. She tells her their dad is sick, but that their parents don’t want her around.

Then Janie puts the stall on her grad school-level studies of mathematics — following her brilliant father’s footsteps, though it doesn’t come as naturally to her — and travels to Korea with her parents.

Back in Korea things seem better for her father. Days are spent taking walks and tending to the garden. Greeting family members they haven’t seen in two decades. Stories of the past — how her father and older escaped when the rest of the family was murdered, the wooing stages of her parents’ relationship — are revealed, as well as the story of the family’s early days in America and the racism they were greeted with, including vandalism and schoolyard abuses.

The side stories and folklore are well-done quick-hit snippets with tons of punch. And the characterization of Janie as a do-gooder adhering to a traditional family role and taking on the part of both son and eldest daughter, are a nice mix. She’s completely selfish and unlikable, but not unknowable. There is a balance here that makes it possible to feel empathy for her, even in lying to Hannah in what could potentially mean the difference between being allowed a sobbing death-bed scene.

Hannah, too, is well played. She wants to buck these traditions and resents the way her sister has failed to develop as an individual, rather than just a role in the family’s structure. While she’s more relatable, she is also pretty selfish.

The story goes off-roading in the latter half: An added bit of familial drama that explains strained relations, a revelation that seems mis-timed and understated in its set up, making it jut from the novel’s flow like a double-jointed limb. It’s followed by a scene involving Janie that also feels ill-conceived in a novel that already has enough dramatic moments, it doesn’t require unsolicited sexual advances from a thesis advisor to add to her characterization or add salt to the plot.

Some of this is really sink-into-able, but it also really drags with a sick bed scene that turns the father into something akin to the killer in horror films, always popping up for one last gust of terror.