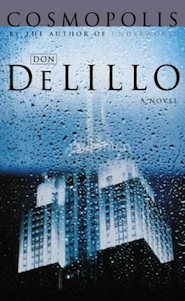 Eric Packer has a 48-room spread complete with a lap pool, shark tank, and screening room. His is one in the line of nondescript white limousines parked out in front of the building. The floor of his ride is made of imported marble. It has a bathroom and enough space for his daily rectal exam. He’s got a cartoonish load of money, his billions birthing billions. What he needs, in Don Delillo’s novel Cosmopolis, is a haircut.

It’s the spring of 2000, but 2000 is tilted to something more futuristic. A hyper-now with more screens and surveillance and news in real-time. The story tracks Parker through less than a day as his driver inches through traffic — the president is in town, there are demonstrations and a spontaneous parade for a dead rapper — toward the old-school barbershop.

He’s got a new wife he barely recognizes. It’s been just more than 20 days and is yet unconsummated. She’s a poet, one of those rich-girl, Ivy League poets. When he encounters her in traffic, outside a theater, in a bookstore, they adjourn to the nearest restaurant and learn things about each other. Like she has blue eyes and smokes. Hates that he smells like sex. (It’s the rectal exam, he tells her, or, it’s the peanuts I just ate).

He’s also got an arty lover, one of those loft sorts, who gives him a tip on a Rothko. He doesn’t want the Rothko, he wants the Rothko Chapel, which includes 14 of his paintings. He’s not going to tear it down, rest assured, he’s going to keep it in his 48-room home. And during his daily car-call with a substitute doctor, he will have something so sexual it’s actually post-sexual, with a work colleague without ever touching her.

Packer is watching fluctuations in the value of yen. As he tells one of the handful of consultants who will visit him in the back of the limo as he travels: He has borrowed yen at a low interest rate and is using the money to speculate heavily in stocks that could potentially bring in high returns.

But the yen is getting stronger, which means he needs more and more money to pay back the loans. Every advisor is telling him to dump the yen, but Packer knows that will do little to scratch his existential itch. Whoa, is that thing flared. He feels the same way about bleeding himself into dumpster diving and abandoned building squatting as he does about the threat that has been made on his life: Invigorated. Alive. In search of post-rich fullness. That grey spot just off the cliff, that spot just beyond having everything is to have nothing — a sentence that admittedly sounds like hooey except that I think I can see it and it looks like Wile E. Coyote spinning his wheels in mid-air.

Eric Packer is a better writer’s version of Patrick Bateman, the attention-seeking pretty boy sadistic star of American Psycho. Minus, of course, the habitrail. Packer has a similar self-destructive intent, but none of the boarding school tantrums, which gives the satire more room to breathe. Don’t get me wrong: He’s no golden boy and you certainly don’t want to make eye contact with him when the doc dons the rubber gloves. His conversations, however, are exactly the kind of thing you want to overhear while dining at the next table over.

Despite being a short book, this one calls for a slow wade. It is super delicious and vivid and funny in short fits and snorts. The sideways gem of the book is what is happening outside the window of our hero’s limo, when Delillo gets the chance to just kick it and write vivid descriptions of street scenes, collages of the neighborhoods and the people between here and the barbershop.

It’s also only the second book in the past three years that I finished and immediately wanted to begin again. (The other being Jennifer Egan’s A Visit From the Goon Squad.)