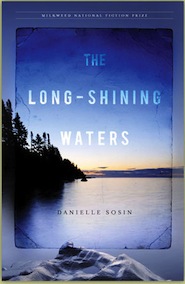 Grey Rabbit lives with her two sons, husband, and mother-in-law in the winter of 1622 on the shore of Lake Superior and it’s been rough hunting and everyone is starving. Meanwhile, she’s having wicked dreams starring dead children and it’s messing with her psyche. She’s waking at odd times, wandering around, being extra protective of her younger son, Little Cedar. Eventually she will consult with her mother-in-law, prays and offers up gifts to the lake.

Berit and her husband live up the shore in relative isolation. Gunnar is a fisherman. Their relationship has been rocky, what with their inability to conceive. But suddenly there is a turnaround, Gunnar is doing his darndest to revive the relationship and it’s really taking. Berit spends the time between gardening and bread baking in a post-coital flush. What she doesn’t know is that Gunnar found a dead body in his nets. It was a man with a wedding ring and when Gunnar considers the family that is waiting at home for this man to return, it sparks a change in his own relationship. Unfortunately, the lake is a bitch and one day in 1902 Gunnar doesn’t come home.

Nora is a widow in her mid-50s and owns a nautical-themed bar in Superior, Wis. There is the comfort of regulars, including an older woman who lives in the apartment upstairs and plays piano in the middle of the night. When the bar burns down, Nora spends some time restlessly considering her options. It’s her granddaughter who comes up with idea to road trip around the lake.

In between the stories there are slices of prose poetry, seemingly the voice of the lake itself. This is a super visual novel about the power of Lake Superior and the way it attracts people and affects dreams and can be both so beautiful and giving and so cruel. See also: The Edmund Fitzgerald.

None of these stories really have a finale or come to a resolution, any more than Nora deciding that she doesn’t want to be a cake decorator when she returns from her journey. So this is very slice of life-y, just peeking in the window and catching the stories of three women who are about to experience something life-changing. A lot of the things I thought would happen didn’t, but that isn’t to say those things won’t happen off the page. Sosin leaves plenty of room for post-read fan fiction.

Part of the fun of this book is reading something set on my home turf written by someone who has regularly walked on this turf and spent plenty of time looking around. It feels well-researched and considered, though that does get in the way occasionally when the facts detract from the inner stories of the women. It seems like maybe Sosin, who reportedly took nine years to write this book, spent her time really living in the character’s heads — if not actually setting up a camp along the shore and living as Berit or Grey Rabbit for awhile, or taking a drive around the lake. Regardless, her version of Northeastern Minnesota is a nice reprieve from the generic Duluth that sometimes makes a cameo in fiction about another place.