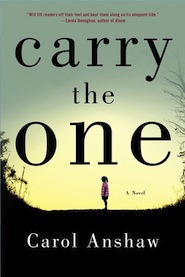 It’s the summer of 1983 and Carmen is a red-dressed bride, a little pregnant and reluctant to join her new husband Matt on the dance floor, where he is awkwardly performing a hat dance. Her brother Nick is in a loft at the hippie farm commune. He’s wearing a white wedding dress, his date Olivia is in a pale blue tuxedo, they’re passing out ‘shrooms to the cousins. Carmen’s sister Alice is prone, sweaty, post-coital, tucked into a room with a box fan with the groom’s sister Maude.

The party winds down and the principals — tired, stoned, and drunk — pile into a car at the end of the night, scooting off down a country road without headlights. This includes Jean and Tom, fringe players and folk singers who are carrying on a non-discrete affair. It’s Olivia who is driving when they hit 10-year-old Casey Redman, who has inexplicably decided to walk home from a slumber party in the middle of the night. She dies, but the passengers in the car escape with just a bit of bloodshed and bruising in Carol Anshaw’s epic novel Carry the One.

For the rest of their lives, these passengers and the bride and groom will be linked by this shared experience. It will always be present in their lives, in varying degrees. This novel traces the lives of the characters from the accident through two and a half decades. This is done in a really keen-eyed way that recognizes “Hey, this happens and it was awful,” but also recognizes that life still has to go on and the characters can’t spend every waking second thinking of that dead body on the side of the road.

For Carmen and Matt, it’s a stain on their relationship — starting off married life with this tragedy. This sends Matt straight into a vat of religion alongside the homely babysitter, who defies the stereotype of “other woman.” Matt ends up a missionary; Carmen boosts her game as an advocate, marching and rallying for causes and raising their son Gabe. Nick, a genius who had skipped a bunch of grades and was studying astronomy at the time of the accident, is consumed by two things: waiting for Olivia to get out of jail and scoring mind-altering substances. His addiction will wax and wane throughout the story, with the distance between the two shortening every year. Jean will be on and off with married Tom and Tom will pen a song about the incident that the other players consider tacky, but that Tom finds justification for, based on Eric Clapton’s song “Tears in Heaven.”

The best of these characters, the one I’m sure Anshaw would admit she loves the most, is Alice the artist. She is obsessed with, maybe addicted to, Maude, who loves her back fleetingly in fits and bursts, before caving to the strong arm of her mother and playing straight. Alice, like her father, is a painter, and as the story unfolds she will develop a bigger following and celebrity among people who care about painters. But her best work is unseen by the masses: A series on Casey Redman as she would have aged. Here and there, caught in the mundane act of living.

I’ve never been to summer camp, but this book gave me a pretty good idea of what it is like to be at that last kumbaya around the campfire, holding hands with new friends and promising to keep in touch, that it will always be like this. I had to press pause twice on this book, once when I didn’t think I could handle what I believed Alice was about to do and once when it got close to the end and I wasn’t ready to stop knowing these characters. I loved the subtle way that Anshaw treated this underlying connection between these characters when the impulse might have been to be overly dramatic. This felt emotionally right on. Plus, she’s just a great writer with a nice eye for details. She also knows that lives are bigger than cliches, and gives everyone surprising twists that avoid the easy and felt very true to the character.