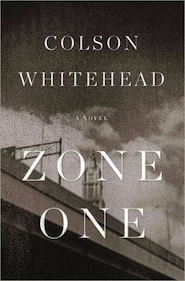 Reader beware: Zone One gave me zombie nightmares. Admittedly, I am perhaps more sensitive than the average person, and this susceptibility was intensified by concurrent watching of “The Wire,” but it in no small part was due to the realism of Zone One.

This book can get in your head. I don’t frequently read zombie novels, but what struck me most about the novel was how real and true it felt. If an epidemic did strike the world, and zombies did begin feasting and spreading their infection, and chaos did erupt, and the “last night” of normalcy did lead to the end of the world as I know it, this is exactly how I imagine things playing out.

A large part of this realism lies with the characters and their development. The protagonist, a man we know only by his nickname, Mark Spitz, behaves rationally and like a human throughout. He makes mistakes, admits embarrassments, and retains an almost impossible balance of cynicism and hope. Mark Spitz returned home on the last night of normalcy to find his parents were zombies, and he has been on the run ever since. He has finally found himself in Zone One, an area of New York City where most zombies have been eradicated by the Marines and a barrier of walls and guns protects the humans inside. Mark Spitz is on a team of three people designated to sweep through the abandoned buildings searching for and killing “stragglers” — zombies who, instead of actively searching human prey, are stuck in one place, unmoving.

One of the major themes of the novel is the struggle between society and the individual. Organization, rules, and community inevitably lead to destruction in the novel, yet humans seem to continuously strive for this connection and the systems they once relied on. Some of the most striking details of the novel include the remnants of capitalism that immediately re-emerged, like sponsored products and hierarchies of command. Furthermore, the book explores the illusion of control—as soon as any character establishes a sense of agency, their view of reality and predictability is shattered.

I attempted to read Sag Harbor by Colson Whitehead this summer, and I couldn’t get through it, mostly because of the countless digressions. If anything, Zone One had even more tangents. In fact, the entire novel details the events of only three days (one hundred pages on the first day alone), but in this post-apocalyptic world they enliven, illuminate, and enrich the scene. Potentially corny details, like the PASD (Post Apocalyptic Stress Disorder) that wrecks havoc on survivors, artfully enhance the book’s criticism of our current world.

I don’t expect zombie books to become my favorite genre anytime soon, but Zone One doesn’t really feel like a zombie book. Innovative and intelligent, this book exemplifies how fiction can change the way we look at reality. As evidenced by the nightmares, this book got in my head (insert “brains” joke here), and I think that’s actually a very good thing.