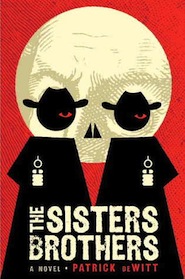 At some point you must have had an uncle, probably not related by blood, whose conversational ticks you struggled to understand until finally you cocked your head and realized “Oh, wait. You’re funny! You are a funny person who tells jokes without smiling” and it all forever changed — for the better — the way you understood people and humor and the concept of deadpan.

Duh-duh duh. Enter Patrick Dewitt’s total riot of novel The Sisters Brothers, the story of killers-for-hire set during the Gold Rush. Eli, the narrator, is the tag-along brother. He’s big and broad with a massive heart that throbs for faithful horses, unlikely women, and the fresh taste of minty tooth powder. Charlie is the remorseless quick-trigger who got his start offing his abusive father and now is lead man for The Commodore. The duo’s latest gig has them traipsing toward San Francisco to kill Herman Kermit Warm, whom they are told stole something from their boss. A man named Morris has been sent ahead of them to spy on Warm and alert them to his hobbies, habits and haunts.

Much of the story is about the journey from Oregon City and the stragglers they meet along the way and their own personal setbacks: Charlie’s got it bad for the booze, his hangovers often causing a delay in travel and Eli is a hard-luck case prone to dental disasters and riding a dying horse.

While set in the old west, this isn’t so much John Ford’s western. And though everyone likes to point at Cormac McCarthy in all instances of tumbleweed, it’s not his either — though some of the cold-blood moments seem like riffs on McCarthy. It’s more like a Monty Python or Woody Allen outfitting the leads in cowboy hats and pitching them against a crudely-drawn spare backdrop: A single cactus, a hitching post. And the busiest of plot points are mere blips in a matter-of-fact story that includes a stable boy amputating a horse’s eyeball with a spoon. The writing and the characters are the thing here, particularly the dialogue. For your viewing pleasure, during this scene late in the book a character is dictating what he wants his friend — and perhaps lover’s — tombstone to read:

“Here lies (redacted), a good man and friend. He enjoyed the finer points of civilized life but never shied from a hearty adventure or hard work. He died a free man, which is more than most people can say, if we’re going to be honest about it. Most people are chained to their own fear and stupidity and haven’t the sense to level a cold eye at just what is wrong with their lives. Most people will continue on, dissatisfied but never attempting to understand why, or how they might change things for the better, and they die with nothing in their hearts but dirt and old, thin blood — weak blood, diluted — and their memories aren’t worth a goddamned thing, you will see what I mean. Most people are imbeciles, really, but (redacted) was not like this. He should have lived longer. He had more to give. And if there is a God he is a son of a bitch.”

I liked DeWitt’s last book, but felt a little yanked when his author bio spun dangerously close to the plot of the novel. It was like, “C’mon, bud. You make a great sentence and you can write anything in the world. Why re-tread your own tired story?” And, Pow! I knew he could do it. The Sister’s Brother is so damn terrific that I’m willing to pretend his debut Ablutions was fiction that coincidentally mirrored his own life. It’s the least.