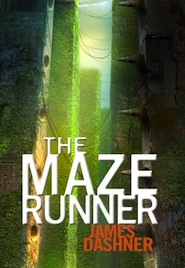 If Lord of the Flies merged with The Hunger Games, and you threw in a dash of The City of Ember, it would look something like James Dashner’s The Maze Runner.

The Maze Runner begins with Thomas waking up in an elevator-like contraption, boys taunting him from above. He only remembers his name, but that’s how all the boys arrive in The Glade, what they call their large, open grassland surrounded by stone walls. They don’t know how they got there, why they’re there, or how to leave, but but they do know that once a month they get a new, male resident.

The walls surrounding The Glade have stone doors that open themselves at dawn and close at dusk. Outside its walls, The Glade is surrounded by mazes that change every day and monsters that come out at night. The boys spend their days running through the maze, trying to find an escape, but everything changes when a girl arrives in The Glade just a day after Thomas, calling his name.

The Maze Runner was a good book, but it’s harder to talk about a good book than a bad one. It wasn’t amazing enough for me gush; it wasn’t bad enough for me to berate. It was good. I liked it. I’ll read the rest in the series. It didn’t blow me away.

What The Maze Runner has going for it is mystery and pulse-pounding action. The maze and monsters are a bit absurd, but why are they there, who is controlling them, and how can the boys beat them? Dashner does a good job of giving a little bit of information, but enough to prompt questions and keep up the curiosity and creepiness of The Glade.

The Lord of the Flies-like governing is also something the book has going for it, but it could’ve been fleshed out more. It’s good seeing the boys assign themselves jobs – cooks, maintenance, housekeeping, maze runners – and there are definite leaders. There are also Jack-like (Lord of the Flies reference!) characters that seem like they’d snap someone’s neck because they were bored, but this all could’ve been better. Give me more in-fighting, some suicidal, confused boys, and a lot of paranoia.

I think it all boils down to lack of character development. Thomas seems to just whine and demand answers from boys who can’t give them. The Jack-like characters are hostile and not very interesting. And the girl who arrives is sick the whole time so she offers nothing. I don’t expect magic from amnesiac teens, but there could’ve been more to help move along the story.

So it’s a good book and I’ll read the next in the series. The ending, that did answer some questions, has me very skeptical, so I need to know what happens next. I just hope that we get more from the characters in the rest of the series than we got here.