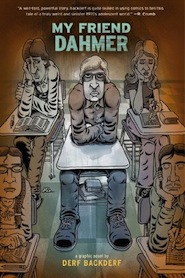 If you’ve ever known a serial killer, you know that there is a pre-kill period ripe for mining. Instances in a life that foreshadowed the dismembered body stuffed into a drain pipe (or the family all dressed in bloody pajamas, axed to death in their country home, as the case may be).

Derf Backderf’s graphic novel My Friend Dahmer considers the awkward teen years of Jeffrey Dahmer, who went on to fame as a killer who trolled Milwaukee’s gay community and had a taste for human flesh. A trophy collector who kept severed body parts in his home, including a head in his refrigerator. He was caught in 1991, with 17 kills under his belt, having bungled job 18. But before he gave in to the sexual compulsion that included corpses and fantasies of entrails, he was a quiet friendless kid living in Bath, Ohio, who was mostly ignored though occasionally bullied by his peers.

Derf Backderf was his classmate, dangling a wisp above Dahmer in the school’s social ladder. Though Derf had friends, a small crew of band geeks who found a version of fun that was alternative to the late-1970s portrait of a popular high school student. The group integrated Dahmer as a sort of mascot. They liked the “spazz” routine he had adopted in which he stammered and seized and otherwise mocked an interior designer in town with cerebral palsy. They didn’t, say, invite him to go out for pizza, but they did encourage his tacky act and adopt some of his sayings — “Dahmerisms” — into their own repertoires. Though the boys become increasingly uncomfortable with him — specifically when he downs a 6-pack in 10 minutes while on their way to a prank they plan to pull at the mall.

When Backderf’s story opens, Dahmer has come across road kill, which he scoops up to take to his hut in the woods. He plans to soak the dead animal in acid, a sort of experiment. Some kids interrupt the job and he shares his collection, a round of show-and-tell that ends with junior-high-aged acquaintances barfing in the dirt. This hobby continues well beyond the point where his father, a chemist, asks him to stop. Dahmer simply moves to a new location, a place where the dog skull on a stick found along a path convinces locals that there are satanists living among them.

This book is truly chilling. Backderf’s Dahmer is an expressionless figure with a dead-eyed gaze, a hulking man with rounded shoulders and a visible awkwardness with body that reveals his inner struggles to remain human. (Through much of the story, Dahmer is hammered and his face shaded to show the 7 a.m. buzz he must maintain in order to numb his sociopathic compulsions). Some scenes show him looming over road kill from the perspective of the animal. This is terrifying.

It is also so well done and so complete. Granted, there are times when a reader might go wide-eyed and wonder if this was such a great idea, reading this before bed. Backderf took great pains to tell a factual story that includes researching Dahmer’s FBI file, newspaper accounts, and memories that the friends corroborate.

He stresses in the beginning of the story that he is only sympathetic of Dahmer — who had a shitty home life and school life — until the point where he kills. Backderf is also looking for someone to take some responsibility for this kid who slogged through high school drunk without attracting the attention of a single authority figure — including his parents. Dahmer’s mom, who had her own struggles, takes a bit of heat. His father, largely unseen, gets less. One of the weirdest things is the part where Backderf finds out that one of his classmates is a serial killer and Dahmer is his second guess.