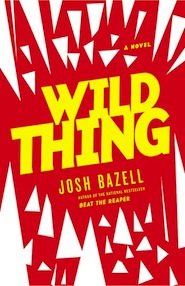 When we last saw Peter Brown, he was against the wall. Ripping one of the lesser-essential leg bones from his own body to use as a weapon against a mobster. It was a cackle-inducing scene of yuck that remains one of the highlights of my personal highlight reel of contemporary fiction. Eleven years later, he’s still on the lam. Now he’s working as a doctor aboard a cruise ship. His name is Lionel Azimuth and when he extracts the bum tooth of a cruise ship staff member, it crumbles into a brown liquid. Still with the yuck.

Wild Thing by Josh Bazell is the followup to his fantastically hilarious whiz-bang gag trip Beat the Reaper, one of the best things that happened in 2010. This one has a lot of the same ingredients — lunch-gurgling scenes, sassy banter, and some genuine what-the moments. But, while plot doesn’t always have to matter in cases of great entertainment, this one is a little too loose, lacks impact in its bam! moments and goes off-roading to some pretty meh places. See: Completely unnecessary cameo by Sarah Palin.

It all starts on White Lake in the Boundary Waters where two teen couples are engaged in low-level petting, in one case, and full-on yelp mode in the other. Autumn Semmel dips into the lake and her boyfriend follows. When he doesn’t come up from the water, she begins to fear the lake horror of having her leg suddenly grabbed by him. Then he does come spitting up, barfing a rope of blood and not long for life. As for Autumn: “The thing rams into her from behind, clapping shut her rib cage like a book and squirting the life out of her like water from a sponge.”

Uh oh. Scary sea monster skulking in the lake with a taste for human blood and guts.

The character known as Lionel Azimuth is commissioned for a job, part security, part mythbusters — by a reclusive billionaire called Rec Bill. The doctor is asked to accompany his staff paleontologist Violet in a trip to the lake to discern the truth behind the monster. They are part of a party organized by the owner of an outfitting company in a small town in Northern Minnesota, and the travel team includes a pop star, some persnickity Republicans, and a celebrity judge who will verify the legitimacy of the beast, Sarah Palin.

There is a strong sexual attraction between Lionel and Violet, addressed the second they meet when she asks him, with less family friendly phraseology, whether they are going to consummate this thing on this trip. The small town of Ford, Minn., is populated by a bunch of meth makers, meth heads, and meth thugs. There is also a mystery surrounding who killed Autumn Semmel’s father less than a week after her bones were crushed. And there is a shout-out to my little Northern Minnesota city:

“Right after we passed Duluth, which turns out to be a bunch of freeway exchanges between new-looking paper factories, every one of them pumping smog as big and opaque as clouds out of its stacks, we stopped at a Dairy Queen for lunch.”

Where Beat the Reaper was clever and surprising and deliciously descriptive and disgusting, this one is more self-conscious in its efforts to be clever and surprising. The big reveal feels like an episode of “Scooby Doo,” something Bazell must have been channeling a bit considering a conversation between Violet and Lionel that has her deconstructing the sexual relationships on the cartoon. For instance, that Velma is sneaking around with Fred on the side and faking gay so Shaggy will lay off of her.