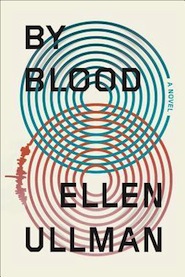 The premise is simple and surprisingly not considered in more fiction: A man rents a work space in an old building and ends up next door to a psychiatrist. While most of her clients are muted by the doctor’s white noise machine, one patient cannot stand the whooshing unorganized sound and asks that she turn it off during her weekly sessions.

The man listening in, and the patient, in Ellen Ullman’s novel By Blood are nameless. But he latches on to the woman’s story as though the sessions are his own personal reality program. He falls into something between love and paternal protectiveness over the course of the year spent monitoring her progress. He becomes so obsessed with her that he develops disdain for the doctor and is forced to meddle, helping her in unseen ways that play to his strengths as a college professor.

Meanwhile he’s mad and getting madder in a frantic, dizzy, stumbling way that is very Edgar Allan Poe.

The man is on leave from the university during the period of the Zodiac Killer and Patty Hearst’s kidnapping. He is being investigated for an inappropriate obsession, maybe even stalking, of a male student. He doesn’t dispute the charges and nothing he does in this novel will support any claims of innocence. He moves to San Francisco, rents a cottage near the water and office space in a building so old that the marble steps have bucked from years of use. His office is a small room with a door that links it to the doctor’s office. He’s so close that he can hear the swoosh of her nylons rubbing against each other as she shifts positions. When she smokes, the smell curls under the door.

Every Wednesday the doctor meets up with the patient: a lesbian who works in finance and is sorting through relationship and identity issues, namely that she was adopted and is curious about her past and what it would mean to look like one of her relatives. He is immediately captivated by the theme: “I was like a person who had happened upon a novel fallen open at random,” he thinks.

The eavesdropper can relate. He comes from a long line of mental illness and he is envious of people who can separate themselves from the baggage of family. Would it be better to be an independent person, free from the knowledge that this relative and that relative committed suicide? To go blindly into the future not knowing what his chin will look like when he has aged? He thinks so.

The doctor wants the patient to shake down her adoptive mother for the details of her birth. The adoptive mother is as emotionally shaky as their relationship and must be about three martinis deep before she will spill any of the details. Eventually she reveals that the woman was born of a Jewish mother during World War II. She was given to a Catholic charities organization, which baptized her and sent her to America, where she was adopted by an off-shoot of a Catholic church near Chicago — a cult whose leader balks when he learns that her birth mother was Jewish and gives the child to his son, who has left the church.

The patient, Protestant by birth, has her mind blown. Everything she has believed about her life is topsy-turvey. She’s Jewish. She came from Germany. She was abandoned by her original adopter. While smart in areas of finance and numbers, the patient doesn’t have the research skills to even know how to begin a hunt for her birth mother, so the professor steps in. He sends her anonymous packages to guide her hunt, the address label bearing the fictitious name of an underling researcher at an organization in Chicago.

In the meantime, he is losing his mind. He is subsisting on these weekly sessions, planning his life around them. He sits in the dark and doesn’t move so as not to attract attention. He arrives when the doctor is on break so she doesn’t hear the door open. He receives notice that the university has begun a more thorough investigation; He digs in deeper to the patient to distract himself. His rental home is in shambles with messes he doesn’t remember making.

This book is a real thinker about identity and how upbringing molds people and what is changeable. It’s about recognizing one’s face in the face of a relative and about not wanting to see that map of the future. It is also a Holocaust narrative from the perspective of a woman who shed her Jewish identity and married a family friend who was Catholic, converting and changing her name and then faking pregnancies so she can pull the Aryan fetus trump card in the face of being sent to a work camp. Meanwhile, all around her, she must see the faces of old friends who know what she has done. Ultimately, this doesn’t save her from a fate similar to her neighbors.

The story is told in this very frantic way and the narrator is a real creeper. It’s hard to stop reading which is both satisfying and not: Ullman has mastered the art of the cliff hanger, although it becomes a little self-conscious about midway through the story when every chapter ends with someone taking a deep breath, seemingly seconds from a big reveal about the patient’s background — only to start the next chapter with a long story that ends with another cliff hanger. These frustrations aside, the story is a real tickler filled with intrigue and “Yeah, but then!” moments.