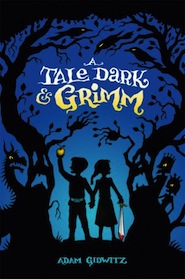 We all know the story of Hansel and Gretel: sweet, innocent brother and sister are almost eaten by an old hag living in an amazing house made of candy and cakes. Or at least this is the story we were told, but our parents lied to us. Adam Gidwitz sets us straight in A Tale Dark and Grimm.

Gidwitz lets us know that Hansel and Gretel were sweet children, but they had to flee their home after their father cuts off their heads. Of course they were put back on (whew!), but would you want to live with that man? Me either.

Hansel and Gretel are forced to become stronger when they leave their home because they get into a lot of sticky, bloody situations. They are transformed into animals, killed and brought back to life, and, my favorite, sent to hell where they outwit the devil. Who knew Hansel and Gretel were such badasses? Adam Gidwitz knew.

Gidwitz’s tale is cute, funny, and full of gore. He cleverly weaves Hansel and Gretel into some Grimm fairytales we’ve heard over the years, and some that may be new to us, and they literally go through hell to try to find their way to a nice, safe home. The stories are great, but what’s also great is Gidwitz talking to us throughout the stories to clarify some things and warn us of what is coming, right from the beginning:

This story is like no story you’ve ever heard. You see, Hansel and Gretel don’t just show up at the end of this story.
They show up. And then they get their heads cut off.
Just thought you’d like to know.

He also warns us of how gory this story will get:

Are there any small children in the room now? If so, it would be best if we just let them think this really is the end of the story and hurried them off to bed. Because this is where things start to get, well . . . awesome.
But in a horrible, bloody kind of way.

And he continually warns us of this bloody story, which I know will just make kids want to turn the page even faster:

Oh, and while I’m thinking about it, you should go ahead and rehire that babysitter that came by for the previous story. Make her take the little ones out to a movie this time. A G-rated movie. Or an R-rated movie, for that matter. Whatever it is, it probably won’t be as bad as what you’re about to read.
I know, you don’t believe me. “How much worse could things get?” you ask.
Believe me. Much worse.

Gidwitz’s tale will capture both boys and girls, and those of us who are far from young. It’s clever, funny, and a charming retelling of the Grimm tales, and yes, it’s bloody. You’re forewarned.