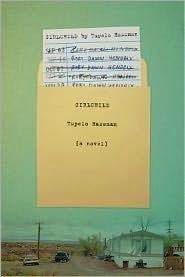 There’s something disconcerting about disliking a book where a child suffers horribly. It makes you feel like a heartless monster. But here I am, not liking Girlchild by Tupelo Hassman.

In this case, I don’t blame callousness for the dislike, but rather the clever way the story is told. Hassman has chosen to tell Rory Dawn Hendrix’s story by way of word collage. The novel is a mishmash of first-person narrative, social worker reports, and occasional chapters from the Girl Scout’s Handbook as translated by Rory. There’s also math problems, bartending guides, and other sort of wordy ephemera. What’s not there? A straight cohesive story that allows you to get close to the main character/narrator.

Rory Dawn Hendrix, the feebleminded daughter of a feebleminded daughter of a. . . well you get the idea. Rory doesn’t have it easy, she’s growing up in a trailer park outside of Reno where her mom tends bar at a truck stop and drinks quite a bit. Rory doesn’t have any friends and is often left with hinky babysitters. The book follows Rory around from the age of fiveish to about sixteen as she struggles with her white trash-hood, poverty, loneliness, sexual abuse, and her family’s history.

I feel bad being so dismissive. There are parts of this book that are so beautifully written it takes your breath away. It’s obvious that Hassman has a heap of talent. However, in the case of Girlchild it seems that cleverness or edginess or experimentation or whatever they’re calling it these days got in the way of telling a story. Because the chapters are so short and choppy (the longest one is maybe three or four pages) and mixed in with all that social work and Girl Scout hooha you never get a real handle on Rory and this distances the reader from her plight.

Now, before you call me a cranky traditionalist, I can get behind innovative and experimental fiction. Jennifer Egan’s A Visit from the Goon Squad is one of my favorite books. But that edginess has to be in service to the story, and in this case I don’t think it is.

My biggest complaint is that the book feels too “writerly.” The entire time I was reading Girlchild I was acutely aware that I was reading a book and that it wasn’t Dorothy Allison’s Bastard Out of Carolina.

Rory’s voice didn’t feel genuine and so much of the way the story is told felt like an affectation. It was as though the story only existed to try out all these different ways of writing and not because the story needed to be told, demanded to be told in that way. There are entire chapters about Rory’s abuse that are blacked out. Where does this come from? As a reader, I never really got my feet under me in this one. Is the book something Rory is writing for/to someone? A journal? Where is she in her life when she begins telling us this story?

Much like the way the story is told, Girlchild is a confusing jumble of really beautiful sentences that don’t add up to much.