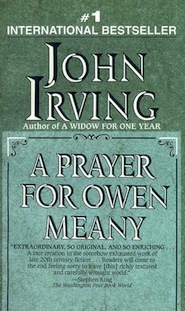 I had to pay a fine for keeping A Prayer for Owen Meany two weeks past its due date. This was in the last days of 1990. I was eighteen and had yet to grow into the book quitter that I am today.

Back in 1990 I did not care so much for the first hundred-ish pages of OWEN MEANY. It was a strange time in my reading life. I was adrift. Out of high school but not yet enrolled in college due to an oversight by my poverty-stricken parents, I was a self-guided reader and wandered around the Chippewa Falls Library checking out anything that looked remotely interesting.

I could feel myself growing out of young adult books, and yet I was totally disappointed in what I thought were the grown up books. Until I discovered John Irving, grown up books consisted for Judith Krenz, Danielle Steele, and Jackie Collins. Those were, after all, the kinds of books my mom read. Well that, and true crime books by Ann Rule but even then I knew non-fiction was not my thing.

I only picked up OWEN MEANY because it sat on the shelf next to The World According to Garp, and I had fond memories of the movie. So with that in mind I gave OWEN MEANY a shot. I wish I could remember why I didn’t like those first hundred pages, what made me drag my feet so. What I do remember is that once I hit a tipping point I could not be separated from OWEN MEANY and I spent every waking moment immersed in the world of Gravesend, New Hampshire.

Re-reading the book twenty years later, I didn’t have the 100 pages problems. In fact, the moment I opened the book I fell in love all over again. I like to say that Lionel Shriver’s We Need to Talk About Kevin shows us the power of point of view. In that novel we’re so entrenched in Eva’s point of view that we start to think, “yeah, yeah that infant is totally sabotaging her!” It’s crazy and amazing.

OWEN MEANY, to me, shows us the power of foreshadowing. It’s so brilliant. From Watahantowet’s armless totem to OWEN’s dream to the armadillo and the dressmaker’s dummy and about everything else that happens in the book, Irving drops the reader all kinds of clues to what’s going to happen.

So what’s it about? It’s about Johnny Wheelwright the, for lack of a better word, bastard son of Tabitha Wheelwright, the charming, charmed daughter of the wealthy Wheelwright family and his best friend OWEN MEANY, a strange, small kid with an unusual voice. A voice that makes people take notice and sometimes gives them the SHIVERS. Throughout the book OWEN’s dialog is rendered in all caps to get across the unusualness of his VOICE.

It’s so hard to sum this one up, not only because my thoughts about it are clouded by my love for it, but because it’s about so much. The book follows the boys from their childhood in New Hampshire through high school and college, and how the Vietnam War tears them apart. Johnny as a forty-something adult living in Toronto tells the story in flashback, and interspersed are scenes of Johnny’s life now (now being the late-80s, the waning days of Ronald Reagan’s reign).

Gah, that makes it sound so dry, but it’s not. It’s a big, beautiful book about love and friendship and fate and faith and spirituality and politics and Vietnam and the Iran-Contra scandal and it’s all infused with Irving’s humor and engrossing writing. It’s filled with surprises and passion and mystery.

It really is everything you’d want in a novel. Reading this book changed my life. Sounds like an exaggeration, I know, but when you had been reading a steady diet of shitty romance John Irving is a revelation. A Prayer for Owen Meany is the first book that really showed me how beautiful and wondrous and wonderful literature can be.

P.S. Christa, now it’s your turn to read one of your golden oldie favorites.