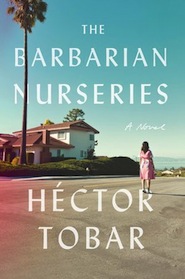 The Torres-Thompson family of Southern California has crested flush financial times and is now dipping into a place where flashing plastic can have humiliating results. Scott, a programmer, and Maureen, a stay-at-home mom, have laid off sixty-six percent of their staff, both the nanny and the gardener, and have beefed up the duties of the Mexican housekeeper Araceli.

Tensions are high at the start of Hector Tobar’s novel The Barbarian Nurseries. Scott Torres is hiding out, face deep in video games and an inner-office flirtation. Maureen Thompson’s inner control freak is struggling to keep it together in the face of the home’s aesthetic decay. Her answer is to rip out the faux rain forest in the backyard and replace it with a faux desert, which will be a major blow to the family checkbook, but ultimately require less upkeep. This is a last straw for Scott, who sees the bill and loses his shit, unleashing an unprecedented instance of domestic violence that ends with a broken coffee table and the couple retreating to separate corners of the house.

Early the next morning Maureen gets off the floor of the baby’s bedroom, raids the family earthquake fund, and steals away for a weekend at the spa with her infant daughter. Scott is gone when she leaves and she assumes he has gone to work. Really he has gone to the apartment of a young admiring co-worker with plans for his own weekend break from cacti and burning bushes. Araceli wakes to find an eight-year-old boy and eleven-year-old boy alone in the house, which comes to weigh on her more and more as time passes without any word from either parent.

A few days pass and Araceli, who is no Mary Poppins, has called all the emergency contacts and is stuck. She worries that if she calls the police, the boys will be sent to a foster home. So she sets out to find their estranged grandfather, a man seen in a thirty-year-old family photograph standing in front of a home in Los Angeles. They leave the gated community, board a bus, and make for Union Station.

What follows is Tobar’s love story to Los Angeles, where he is a writer for the Los Angeles Times IRL. There are descriptive passages of neighborhoods and transit stations and landmarks along the route. Every person the trio encounters is given a voice, as the story is written from inside the head of every character, sometimes the perspective shifting mid-paragraph.

The traveling group finds kindness in Scott Torres’s old neighborhood, where a woman lives in a modest home and has grudgingly taken in an orphan, but gives them a corner of floor for the night. They head to another neighborhood and shack up with a city councilor, first participating in a grand July 4 party complete with roasted pig and fireworks.

When Scott and Maureen swallow their pride and return to their empty home, chaos ensues. There is no note, no kids. They blame each other, then they blame Araceli. They give an abbreviated and polished story to the police and become the face of tragedy in the local news: A rich white couple whose Mexican housekeeper has made off with their children.

This book needles its way to nerve endings. Tobar is a master manipulator with his handful of characters who are such awful assholes, content to let someone else sweat it out in a jail cell instead of owning up to their own selfishness and mistakes, to sully the idea that the Torres-Thompsons are anything less than a perfect family. If you’ve never wanted to push a fist straight into the heart of the book, now is your chance. The story also points at the nature of media to latch on to a sexy story and the way that media consumers will latch on to an issue and choose sides, make signs, create petitions without knowing the details.

Some of the scenes have a bit of “Three’s Company”-ness to them, with important phone calls happening just as Araceli leaves a room, and Scott Torres visiting his old neighborhood the same day his kids and housekeeper end up there.

It’s a tough book to set aside, as you wait to see whether there will be justice. I liked it. It was a thinker and it gave me a character-rage cardio workout. Fun Fact: As I was reading I had a dream in Spanish. A few chapters later, Maureen Thompson had a dream in Spanish and described it in a way that was similar to my own dream. So that happened.