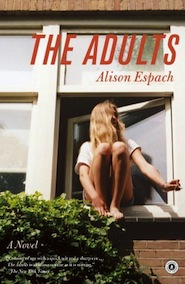 I no longer actively seek out books I know I will hate. The anaerobic thrill of speed reading through adjective abuse and gender stereotypes has lost its thrill and now I simply prefer to read things I like and not read things I don’t like. Goodbye, Tao Lin. Adios, Stephenie Meyer.

On the other hand, I will still commit to something I’m dubious about. Meet Alison Espach’s The Adults. It has a real chick lit walk and talk, as though chick lit was stopped in the bathroom by a tall woman with an British accent who licked a Kleenex and scrubbed at chick lit’s excess blush. This is my presumption from staring at the cover and reading the jacket flap.

“You need to read The Adults,” said a friend I prefer to get music advice from more than book advice. “I think you will either love it or hate it.”

The verdict: Love. Or, love-ish.

This is one of three coming-of-age stories I’ve recently crossed with, a bundle that includes a young God-fearing Jewish boy torturing himself in the face of pornography, a young Iranian girl getting lippy with the man, and this: a financially unimpaired Connecticut girl with an ever-shifting family life. They’re all different and they’re all good.

The Adults is the most traditional of these three, the standard sassy lass, witty banter, sexual awakenings, crises modes, early adult onset ennui. But, The Adults is also an example of how a story can be about anything and a real writer, a writerly-writer, a clever writer can make it work. Espach has such a great voice.

It all starts with a backyard party for Emily’s father who is turning 50. Her father is planning to move to Prague for work, a move that is coinciding with her parent’s looming divorce. They are keeping things status quo until the natural split happens after the holidays.

Emily, 14, has hot pants for the next door neighbor boy, Mark, and they’ve taken off into the woods for the kind of secret language verbal play that besties have. She’s pretty sure he’s leaning in to kiss her, but instead he has noticed that some other party-goers have snuck off for some heavy petting. Emily is practically puckered when they realize that it is her dad and his mom and they are going at it.

In that instant everything changes. Mark, whose father is struggling to medicate his depression, resents Emily and her father; Emily wants to scream about what she knows while riding in the backseat of her parents car. Soon after, young Emily witnesses Mark’s father’s pretty public suicide because she happens to be looking out the window when he hangs himself from the tree. And then Emily begins a sexual relationship with one of her teachers.

The story is told in three parts: Emily as a high school student, Emily after college living in Prague with her father, Emily living in New York City with her boyfriend. It is the high school setting that packs the biggest punch and is the most unique and fully developed, while the other segments are less fine-tuned, but better than passable.

Espach’s strength comes in moments of chaotic dialogue, an area in which she crafts funny one-liners, but she does it infrequently so each one really stands out. A student has posted fliers around school for a forum in which black students can talk about attending a predominantly white school.

“‘Everybody is invited,’ it said. ‘Even white and Jewish people.’ Jewish students walked by the signs offended, explaiming, ‘What, are we not white? Are we not black?’

Martha walked by and said, ‘I don’t get it: Is being Jewish the opposite of being white? Is it?’

Mostly this book is a fresh look at people being people. Children acting as adults and adults acting like children. How things that happen can make or change you and what you might have been had those things never happened. It’s good stuff.