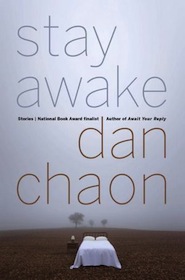 The characters in Dan Chaon’s short story collection Stay Awake are quiet. They have experienced loss: a person, themselves, or a ring finger that popped off after a nasty spill from a ladder. Maybe they are leaving something. Or maybe they aren’t even aware yet of the loss, like baby Rosalie, born with an additional head, part of another baby that did not form and has been surgically removed. Her father, in traction after a car accident, imagines for her a time in the future when she will wake and hear a voice in her head say: “Hello. I’m still here. I’m still with you.” The characters in Dan Chaon’s collection are all haunted, whether they know it or not.

In one, a son was the first one on the scene — so early he actually heard the clomp of the finale — when his parents both committed suicide in their bedroom. They’ve left a note on the door instructing him to call the police, but not go into their bedroom. He holes up in a single room of the house, wrapped in a rind of his necessities, and in a rapid state of mental decline.

Teenagers lose a baby and all around them the grief of others is tinged with the relief that they have dodged a life-long anchor. Except the male half of the couple, who had already re-imagined life in this new way, married, jobs, a child. A man, fresh from a heart attack, returns to all of his bad habits on a business trip gets caught in a lonely spiral that takes him far from anything he knows. In another, a man kidnaps his meth-head girlfriend’s child and then pulls the unimaginable encore.

In my favorite story, Critter’s wife has died and he and his young daughter are staying with his sister in Ohio. He keeps finding handwritten notes fluttering in the wind or left behind places. He finds a note on the sidewalk after his wife’s funeral: “To psychic underworld: stop astral traveling to molest/deceive (animals too). Animals are not made of hate. Cease and desist.” This is just the sort of thing his wife would have enjoyed. His sister has a collection, too, including: “Hi. I had cyber sex!! With a guy named Eric! I love sex!!”

“Something had happened to him now that Beth was gone, he thought — there was an opening, a space, a part of his brain that had been deaf before was now exposed, it was as if he were a long-dormant radio that had begun to receive signals — tuned in, abruptly, to all the crazy note-writers of the world.”

These stories are all so similar in tone, a low level of creepy and the kinds of summer bonfire tales you sink into so hard you forget you’re reading and the scenes just act out in your eyeballs. These characters seem all seem a little bit related, like distant cousins different towns with the same shaped nose and vaguely recognizable mannerisms.

They are tinged with good humor and intrigue and unpredictable wrenches. And they are all a little psychologically eerie if not downright spooky: like ghost faces in the window or hearing a nose in another room of your empty house.