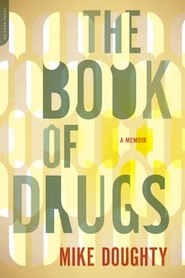 I’m a big believer in that adage about not meeting your heroes because they’ll just disappoint you. The same can probably be said about reading memoirs by your heroes. Ignorance really is bliss, people.

What we need here is a word for being compelled to do something you know is going to break your heart. That’s the word I’d use for reading Mike Doughty’s memoir The Book of Drugs. I had to read it. I couldn’t not read it. I’m a Doughty fan, a fandom that stretches back to 1994 and snakes its way through most of my adulthood. It’s the type of fandom that led me to go camping for the first (and probably last) time ever. Camping at a place with hippies and unending drum circles that never, ever stopped. Ever. Did I mention that the drumming never stopped, even when the sun began to peek over the horizon and all good people had been trying to sleep? It was awful. Mike Doughty, however, was fabulous.

So, wrapped in my fangirl armor, I dove into The Book of Drugs which chronicles Doughty’s descent into drugs and ascent to rock stardom. It’s painful to read both as a fan and a human.

Doughty grew up a sensitive kid on the campus of West Point Academy where his alcoholic dad was a teacher [Aside to fans: The neighborhoods in West Point had names like Stony Lonesome and Grey Ghost]. His mom was no treat either, and he had one friend, another oddball. Doughty escaped early to Simon’s Rock, a small Massachusetts college that accepts kids after their sophomore year in high school. He fell in with a group of friendly Goths and discovered the joys of smoking weed.

After college he set out for New York and began diligently busting his ass to get gigs, all the while falling a little more in love with drugs. By the time he puts together Soul Coughing he’s got himself a pretty good band and a pretty good addiction.

He spends a lot of the book recounting the petty disagreements between he and his bandmates, the loads of sex he has with women around the world, and the drugs he ingests. And the misery. Always the misery. While the narrative is sometimes disjointed, jumping back and forth in time, paragraphs that don’t seem to have anything to do with what came before or after, the story is pretty cohesive, a this sucked but I survived story.

It’s hard not to play armchair psychologist when reading the memoir. It’s obvious that Doughty still has heaps of scorn and bitterness when it comes to the band that made him famous. In fact, he doesn’t even refer to his bandmates by name, instead it’s the sampler player, the drummer, the bass player. At times this comes across as “I can’t even say their names, it’s too painful” and at others “fuck them, I’m not giving them one lick of recognition.”

It would be easy to judge the book as the petty musings of a bitter man. But it’s not that easy to dismiss, because while Doughty does have a lot of scorn for those un-named bandmates, he’s just as unmerciful about himself — from his own talent to his soul-crushing jealousy of friend/contemporary, Jeff Buckley.

The Book of Drugs feels like the most honest book he could write, and I dig that. If you’ve ever listened to a Soul Coughing or solo Doughty song you know he has a way with words. That’s in this book too.

Plus, I’ve discovered that the mere act of acknowledging something kind of distasteful about yourself goes a long way with winning you favor. Here’s what I mean. He writes:

I’m full-bore bat-shit crazy with regards to Soul Coughing. If somebody says they love Soul Coughing, I hear fuck you. . .

He acknowledges he has a few issues with his old band. And a few pages later he writes:

There’s a Soul Coughing fan reading this whose heart I’ve just broken, who picked up the memoir of the guy from a band he loves, and it turns out I hate what brought him to this book in the first place.

My bitterness demolishes me, wakes me up at 5 AM and won’t let me fall back asleep, drives me to waste hours fighting ghosts in my head. But, in my struggle to stay with the music, I’ve lucked into people who are with me.

If you are with Doughty despite his feelings for Soul Coughing, you’ll probably enjoy the book. If you aren’t, it might be best to skip it and keep on your merry way.