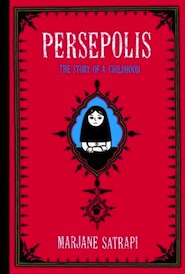 When Persepolis opens, Marjane Satrapi is in grade school in Tehran. To her, the Islamic Revolution means now she has to wear a veil. Her French non-secular school closes and she must attend a gender segregated school. It means that when her mom is photographed by news agencies demonstrating in the streets, her mom must dye her hair and wear sunglasses to avoid recognition and subsequent retribution. While her parents protest, young Marjane rallies her friends and poses as Che Guevara for her own play protests.

Satrapi’s graphic novel is equal parts a coming-of-age story and a first person account of being an Iranian girl in a time when if her father is late getting home from work, the worst case scenario is highly probable.

An uncle is executed. Family friends who have been imprisoned return with stories of torture involving fingernails, beatings, and burns with an iron. When Iraq attacks Iran, the grocery shelves are stripped bare and the neighbors are killed when the Satrapi family’s block is bombed. Satrapi’s rebellion is painted nails, a fondness for things found in Western pop culture like Kim Wilde and white Nike shoes. She’s also loudly anti-authority, which gets her in trouble at school and ends in her parents sending her to Vienna at age fourteen to continue to her education.

Vienna proves to be a different kind of challenge then, say, seeing her neighbor’s bracelet, still attached to an arm, amid the rubble of their home. In Vienna she is a foreigner who gets shuffled to a bunch of new living situations until she finds friends, a boyfriend, an asshole landlord who calls her a whore and lets her dog shit on the bed. In Vienna she blocks herself from news about what is happening back home and sometimes lies and says that she is French.

Marjane is a prickly character who earns plenty of appreciative “damn, girls,” but also manages to have some sort of icky angsty stuff that keeps her from being super human. Persepolis is familiar in the way that a story that has a fifteen-year-old girl is still about a fifteen-year-old girl. The body changing, seemingly by the minute, first loves and blending in with friends. Satrapi balances a story about war and being a woman in Iran with the moment when the earth shifts and you realize the reason your boyfriend didn’t want to spend your birthday with you is because he was banging someone else. And everything between. Satrapi’s story is horrifying and heartbreaking and interesting and funny and a total must-read graphic novel.