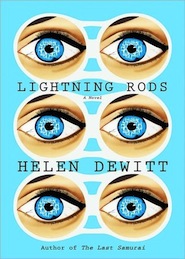 It shouldn’t be an awkward thing to explain to my hair guy the plot of Helen Dewitt’s novel Lightning Rods. For one thing, he has just spent the trimming process going into moderate detail about his current dating life and the highlighting process talking about the time when he was 27 and fell into a relationship with a woman nearly twice his age who confessed to him that she hadn’t slept with anyone in 10 years.

But here I am, backed head first into a sink, my face Prude Purple. The team one sink away is just a little too close, the sound system’s music a little too quiet, for me to comfortably get to the key plot points: A man who invents a Workplace Sexual Harassment Deflection system that goes like this:

The outcome: Higher productivity, less sick leave, no threat of sexual harassment suits from randy men, out of control with sexual urges, dishing unwanted advances to the women on staff. As if explaining the plot isn’t awkward enough, explaining why this book isn’t shit — that it is in fact funny, satire, akin to The Canterbury Tales in some ways — is another animal. Most people don’t want to listen to book talk long enough to hear this part, I’ve found. Book plot summaries as casual conversation with casual readers have an interest time limit similar to the amount of time allowed to deconstruct a dream. I’d be better off just saying: “It’s about a guy. An ‘idea’ man. It’s funny.”

Joe is an encyclopedia salesman who eventually shifts to vacuum cleaners and finds himself in a Florida town recently ravaged by a hurricane where all the residents already have and love the machine he is trying to sell. When he goes door-to-door trying to sell the cleaner, he is invited inside, fed pie and the owners of the vacuum wax lovingly about their relationship with the Electrolux. In between non-sales, Joe chills in his trailer mentally engaged in an elaborate fantasy involving a woman half clothed, half not, leaning over a table or out a window. The naked part is being penetrated, while the clothed part is doing nothing to reveal what is happening. He takes it even further, turning the scene into a game show that plays in his head. That’s when he realizes he could use this interest, turn it into a reality. A real service.

He finds women that are proficient in office duties, women who can type a lot of words per minute and understand the details of working as a personal assistant or secretary. The women form a sort of temp agency. They are swapped into the staff, paid well, and throughout the day they might leave their chair a few times to service the faceless dudes, then return to their office work. One woman, who is saving up money to go to Harvard Law School, considers it just an extension of going to the bathroom. No bigger deal than flushing a tampon. It’s just a body, right? And she’s making a lot of money. Another Lightning Rod uses the time spent in the stall to read Proust in French. She, too, is saving for law school and building a bigger brain.

Complications arise, of course, and Joe tweaks the system. He solves the problem of Equal Opportunity Employment and he comes up with a way to make bathrooms accessible for people of all sizes. Meanwhile, he’s got other inventions in the works.