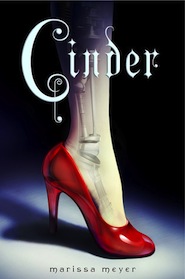 At the mention of their names, we probably all have the same images of Snow White and Cinderella in our heads, and those images come from Disney. In the Disney fairytales, women are either ugly and evil or dainty and in need of rescue by really boring men. With the help of a man, Snow White escapes into the arms of seven men, and in the end another man rescues her with his kiss. Sleeping Beauty is also rescued by a man’s kiss. And poor Cinderella is taunted by ugly, cruel women and at the ball she loses her shoe, because when I’m running I typically just fall right out of my shoes, but not to fret, a man finds her shoe and rescues poor Cinderella.

Fairytales suck. At a young age we’re fed the idea that a woman’s value is contingent upon whether or not a man loves and rescues her, because without a man we’re either in danger or an evil, old shrew.

But thank god for fairytale retellings. Cinder by Marissa Meyer is the latest Cinderella retelling, and in this one Cinderella is a smart, kick-ass cyborg. She does have an evil stepmother, two stepsisters, a sidekick who is not a singing mouse but a girly, fashion-obsessed android, and there is a ball, but that’s pretty much where the similarities end. This is a story that stands on its own, far from its fairytale inspirations.

Set in the distant future in rundown New Beijing, the world is full of humans, cyborgs, and androids, and they face a threat from the lunar people, the people living on the moon. Cinder is a cyborg, so she’s part human part machine, and cyborgs are seen as second class citizens, almost viewed with more disdain than all-machine androids. But even with being shunned, Cinder thrives in the marketplace as one of the best mechanics in New Beijing, and that’s where she meets Prince Kai.

Prince Kai is the gorgeous, charming heir to the throne and he makes girls like Cinder’s stepsisters swoon. His father, the emperor, is ill with the flu-like virus that’s sweeping the planet, killing millions. When Kai’s android, which is full of secret information, breaks down, Kai is directed to visit the best mechanic in New Beijing, and he has no idea she’s a cyborg.

Kai and Cinder’s paths will continue to cross, and I couldn’t help smiling at how charming Kai is. Seriously, I felt like one of Cinder’s stepsisters, so it was easy to see how Cinder slowly starts to blush when she sees him.

But this story is so much more than Cinder and Kai. It’s about the virus sweeping the planet, the potential for a cure, the tension between Cinder and her stepmother, the threat of the lunar people, secrets and lies, and the ball. I can’t give you a summary of it all, but I can say that I loved it. I really thought this was a great book.

What’s so great about it is Cinder. She’s a strong lead character, one who has every reason to give up, but she doesn’t. She’s independent, works hard, fights for what she believes in, and the situations she gets in made me cheer and sometimes broke my heart. She also never acts like a dainty woman in need of being rescued. If anything it’s her who does the rescuing. That’s how I like my fairytale heroines.

There are other strong characters, like Prince Kai who is definitely the hero to Cinder’s heroine, but smaller characters are interesting, too. One of the stepsisters is nice to Cinder and they have a really close relationship, but my favorite sidekick was Cinder’s android. It’s weird saying an android is well-developed, but she is so quirky and completely different than Cinder that I found myself loving their interaction. I want an android like that.

The story that moves these characters is quick and really hard to put down, but some of it isn’t all that surprising. There’s an element to this book about a missing lunar person, and you’d have to be an idiot not to figure this out pretty easily, but I can’t tell if it was supposed to be obvious to us or if it was meant to be a shocking moment. If I was supposed to be awed by it, that didn’t get pulled off too well, but I was okay being in on the secret even if it took the characters too long to figure it out.

Another thing that I wish was a bit better was the ending. I wish it had more of an ending. It’s the first in a planned series called The Lunar Chronicles, and the ending really isn’t an ending at all, it just sort of ends. I like reading series, but I want to have either a satisfying ending or a huge cliffhanger. This has neither.

But my criticisms aside, I really did like this book. Cinderella as a cyborg. I would never have thought of that, but I’m glad Marissa Meyer did. The next one will be called Scarlet, which I’m assuming will be about Little Red Riding Hood. I wonder what she’ll be?