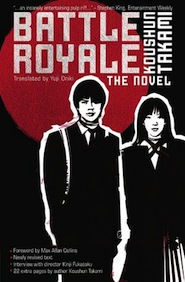 The first thing you should know is that I’m a pussy.

When I imagine pitting myself against another adult human being in combat, I imagine my own arms flailing, missing targets, a sort of bird-like noise coming from my throat. If I found myself in a situation where I was on an island with 41 of my peers and an assignment to kill each other off, big prize going to the last one standing, a washer and dryer, a new car, I would hide. I would hide somewhere high and hidden with a wall I could lean against and a view of the land. I would sit quietly and only move enough to soil myself twice daily. If pressed to fight, say someone snuck up on me, I’d probably do it with my eyes squeezed shut and giggling nervously to cover the sound of bruising.

This is the sort of thing you think about when reading the Japanese novel Battle Royale by Koushun Takami. Your own personal method of battle. You’ll dream about it.

For a reason that doesn’t seem to translate from Japanese to English, each year a class of 15-year-olds are selected randomly to participate in The Program. They are taken by bus, seemingly headed on a field trip, then gassed unconscious. The students wake in a classroom wearing electronic ID collars on an island that has been cleared of its inhabitants. They are given instructions: They must kill, winner is the last one — and there can only be one — standing. They are given a pack that includes some food and water, a map, and a weapon — in some cases a gun, in other cases a bullet-proof vest, in another case an electronic device that helps its holder locate other students. Then they are released in 2-minute intervals to run and hide or stick around and engage in immediate combat with their former friends.

First the obvious: Yes, the premise of The Hunger Games, written later, is similar. But where The Hunger Games is seemingly a vehicle for a strong female protagonist who never begs a vampire to please take her virginity, there are relatively few heroic pretensions in this version. There are 42 characters and a sadistic puppet master goading them along with four daily updates on dead classmates and zones on the island where they can no longer hide or hunt. Some of the 42 characters aren’t actively competing, some are confused about their role and some are painting the island blood red, unflinching sociopaths. Some form teams, including a cute collection of high school girls who have set up something slumber party like in a lighthouse. And some stumble into teams, like the main character Shuya, a nice guy, athlete-turned-musician, who feels it is his duty to watch over his friend’s crush after his friend gets offed in the pre-game. Some go completely nuts, like an unstoppable force with a machine gun and no remorse.

I remember a few bleak death scenes in Suzanne Collins’ first book. But in this one, Takami at times rivals Japanese horror master Ryu Murakami with his scenes of eyeball gouging and a machine-gunned head looking like meat sauce in a broken bowl. Hatchets bisect faces. Bodies are blasted apart.

Mostly the story is a multi-layered murder sandwich, gruesome scenes followed by lulls of movement and character development, followed by more murder. It is deliciously fun. It’s hokey. It’s gross. It’s exciting. Each chapter ends with the number of students remaining, which can be a bit of a spoiler to a person who likes to flip around and check out the length of a chunk.

One of the best parts about reading Battle Royale is the opportunity to play the Battle Royale home game. To look around every time you walk into a room and imagine this is the competition.

That guy over there, he’s a wild card. Hard to say what his approach to the game might be. He might prefer hand-to-hand combat or cyanide in your campfire coffee. Or maybe he would lay low, watch others get offed and then stand up, brush off his pants and challenge the winner with a burst of previously unseen strength.

Her? She would win. She’d never lose. It’s impossible. Lose isn’t in her vocabulary.

And her over there? She’d scratch your eyeballs out and make a necklace from your teeth. This game never gets old.