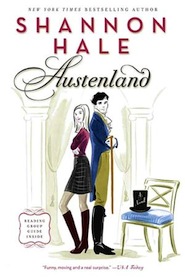 Today, it’s rare for me to read a romance novel, but when I was a young teen I immersed myself in the scandalous bodice rippers. I even had a favorite author, Minnesota’s own LaVyrle Spencer. My favorite book was Vows, a historical romance about a tomboyish girl who works in her father’s stables and the town’s new businessman who makes fun of her tomboyish ways. They hate each other; they love each other. They hate each other; they love each other. Can you feel it?

But I’m long past the bodice ripping romance novels, unless you count my yearly Pride and Prejudice reading. It’s not really bodice ripping; it’s more will they or won’t they, but it probably still counts.

I read and was charmed by Austenland, and I just found out that there is a new book by Hale called Midnight in Austenland. I’m on the hold list for it at my library, and since I will read and review it, it’s only fair that I review Austenland first.

Before she dies, Jane’s old, rich aunt sees Jane’s hidden DVD and in her will she leaves Jane an expensive trip to Pembrook Park, what Jane later refers to as Austenland. Pembrook Park is a Pride and Prejudice lover’s dream. Actors who work at Pembrook Park and vacationers all dress in period pieces, speak and interact as if they are in Austen’s time, including flirting and courting, and most modern conveniences are gone. It’s like Jane is back in Austen’s jolly old England.

But it’s all an act. Or is it? At first Jane is excited to be at Pembrook, even if she is a bit clumsy with the customs and clothing, but slowly she starts wondering if the subtle advances, the ones by the actors and the cute groundskeeper, are real or fake.

Austenland was a really cute book, bordering on too cute, and it was also pretty funny. It’s funny seeing Jane, who is Miss Jane Erstwhile at Pembrook, trying to fit into yesteryear. She struggles with the language, clothing, lack of conveniences, and she battles the strict rules of Mrs. Wattlesbrook, the guardian of prim and proper at Pembrook Park.

I also couldn’t help but smile when Jane finds herself caught in a Pride and Prejudice-like love-and-hate relationship with one of the actors. He at first shuns her like Darcy does to Lizzie in Pride and Prejudice, but maybe he misjudged her at the beginning? I couldn’t help but love to watch him grow closer to her, but, of course, it’s all an act…or is it? The back and forth, is it real or not, between Jane and the actor and Jane and the groundskeeper, will keep you guessing until the end.

Austenland is a quick beach read and a great escape. It’s perfect for those times when you just need to read some fluff. I devoured this fluff and I’m excited to hear there is more to the story in Midnight in Austenland.