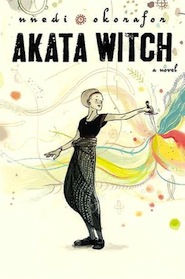 Akata Witch refers to lead character Sunny, a Nigerian 12-year-old girl who is bullied and called “akata,” a derogatory term for an American-born person of African descent. Having moved to Nigeria with her family when she was nine, the bullies constantly call her “akata,” but her looks also generate taunts from them. Sunny has African features but she’s albino with blue eyes. Her skin even keeps her from being outside to play soccer, her favorite sport.

But Sunny’s days get brighter when she is befriended by a couple of kids who think Sunny is special, and not just for her looks. They help her find out that she’s a “free agent,” a person born with magical powers even though her parents don’t have any. Soon Sunny learns of another world, intertwined with ours, and all of its dangers, especially from a powerful magician who is kidnapping children.

Akata Witch was hard to put down. Sunny is a sympathetic, strong character, struggling with bullies at school and at home, but her discovery of a new world, where she is accepted, is touching and the friends she makes along the way are really entertaining. But sometimes I did get confused as to which friend was speaking. Not that Okorafor doesn’t say who’s who, like Hemingway does for pages and pages of dialogue, but some of the friends seem similar that I had to stop and figure out who was speaking. I did read this when I was sick so you could probably blame my fever-induced, cloudy brain for this, too.

Besides the characters, I also loved the magical world Okorafor built. My favorite thing in the magical world is that money is gained by learning. The more you learn, the more money you receive, so when Sunny learns new magic tricks, money just falls from the sky in front of her. No one knows where the money comes from, but it’s clear that knowledge is how to receive it. And with a world where knowledge is valued, they have a pretty kick ass library, too, which this librarian loved.

As far as I know Akata Witch is a standalone novel, but I could really use more books with these characters and this world. There is so much more to explore and I’d love to follow Sunny and discover it with her.