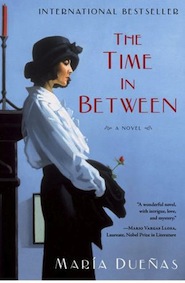 I was looking for a big juicy well-written novel to start out my 2012. This wasn’t it.
My first impressions were hopeful: big, yes, at 609 pages. Juicy? Yes – female lead character who starts as a humble seamstress ends up a spy. Well-written? Not so much. It could be the translation, but by the end pages the melodrama was so broad I could imagine it as a Univision telanova.

With Morocco and Spain in the late 1930s as backdrop, a place and time I’m not that familiar with, the descriptions of street life and smells and tastes should have been jumping off the page. Instead they were rote by rote. Even the line rhythm was the same, paragraph after paragraph. The descriptions of Morocco had me picturing that Indiana Jones movie with the monkey.

The plot moves back and forth from Morocco and Spain following Sira Quiroga’s life. First a seamstress, she falls into misfortune after a bad romance (cue Gaga – very appropriate) in Tetouan. Most of her activities are prompted by relationships with men throughout the book which made the feminist in me bristle. Not surprisingly, she conveniently falls into espionage as a couturier for important men’s wives in Morocco during the Spanish Civil War.

As the rumblings of WWII begin, Sira returns to Madrid on a mission. She takes on a new identity, under the Moroccan moniker Arish Agoruiq – her name backwards. You would think the Germans would have figured that one out. After awhile she takes on an even more dangerous role, travelling to Lisbon working as a spy for the allies. Of course, she predictably runs into many from her past but has to ignore them under her new identity, creating intrigue. Predictable intrigue. Colorful characters populate her life thru-out the book – a rich father she never knew, a mother silenced by pride, a crazy lady who runs a boarding house who becomes a close friend, a sickly British beauty of influence, helpful maids – you get the picture.

In the beginning and in my head I compared this novel to something like The Count of Monte Cristo but regrettably it ended up like a J.D. Robb mystery. Not camp enough to be good, it was just okay. The author’s note at the end was the most unpredictable writing in the whole book. These characters were based on real people! Huh. Well at least I learned something about the Spanish Civil War then. This reading experience wasn’t completely worthless.