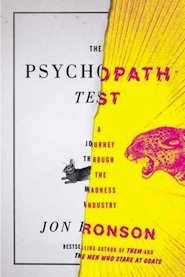 “This is a story about madness.” So begins the delightful insanity of The Psychopath Test by Jon Ronson. Ronson, a self-proclaimed sufferer of severe anxiety, admits that he is an odd choice for a renegade psychopath hunter, but his sense of humor and occasionally bizarre behavior make him perfect for the job of writing about it. He begins his quest after becoming involved in a curious mystery: a strange manuscript, sent to academics around the world, calling out to the universe’s most revered brains to crack its code.

Ronson’s attempt to solve the mystery eventually results in him investigating a variety of subjects, from Scientologists to asylums to the homes of CEOs. One of the most interesting and catalyzing portions of the book is Bob Hare’s psychopath test. Ronson attends a training and learns how to score people on the twenty-point test. It’s impossible not to run through the test for yourself and your friends. Item 3: Need for stimulation/proneness to boredom- well, I do get antsy when I’m still for too long. . . Item 15: Irresponsibility- I have been putting off doing my laundry. . . This ends up being part of Ronson’s point: as we as a culture attempt to delineate crazy, we all have to fight to convince ourselves that we are “normal” (amusingly, he cites reality TV as one way that we maintain our feeling of personal normalcy; I must really need convincing).

This argument builds as Ronson meets Tony, a man who claims to have pretended that he was a psychopath so well that he was locked up in an insane asylum for a decade. Tony’s story is so interesting because it illustrates some central problems with diagnosing someone as a psychopath: who gets to do the diagnosing, and how is it possible that acting normal can actually prove that you are abnormal? The book contained more “normal” craziness than full-on psychopath. I was expecting more characters like The Joker from Batman, but the true threat comes from Hare’s assertion that psychopaths are all around us (1% of the population!) and difficult to identify.

By the last quarter of the book, Ronson got, well, maybe too rational, and the shocking details trailed off a bit, making it less exhilarating than the exclaim-worthy beginning. However, as a whole, this book successfully navigates the thin line between crazy and genius, and by the end of it I felt more like a crazy genius myself, making the read well worth it.